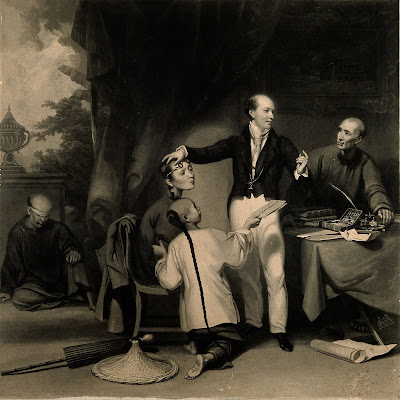 Thomas Colledge with patients in Macao. Aquatint by by William Daniell, 1834, after George Chinnery. Wellcome Library no. 9880i

“The flamboyant Mr Chinnery” is the title of an exhibition on view at Asia House, in the West End of London.* It is a rare chance to see a representative collection of paintings and drawings from private and public collections by the English artist George Chinnery (1774–1852). Though born in Gough Square in the City of London, and baptized at St Bride’s church off Fleet Street, Chinnery spent most of his life in Bengal (1812-1825), then from 1825 to 1832 in Canton (Guangzhou), and finally in the Portuguese colony of Macao (Macau), where he died. Since Chinnery was not only well-travelled but also prolific, versatile and long-lived, the exhibition covers a lot of ground, in every sense.

In India and China Chinnery painted portraits and landscapes, and sketched picturesque scenes of Chinese card-players, boat-girls and builders at work. Among the portraits the exhibition includes mezzotints of William Jardine, the Scottish doctor who abandoned medicine to become an opium trader (co-founding the firm of Jardine Matheson & Co.), and of the Rev. Robert Morrison the missionary, who is shown in 1828 with his assistants translating the Bible into a 21-volume Chinese version, which raises the question as to whether the portrait is mentioned in Morrison’s papers in the Wellcome Library. Chinnery’s portrait of James Holman “The blind traveller”, who travelled 250,000 miles recording his experiences with a “noctograph” is on loan from the Royal Society. A masterly pair of contrasting portraits belonging to HSBC shows two Chinese merchants of Canton: Mowqua (plump and relaxed) and Howqua (emaciated and self-controlled). 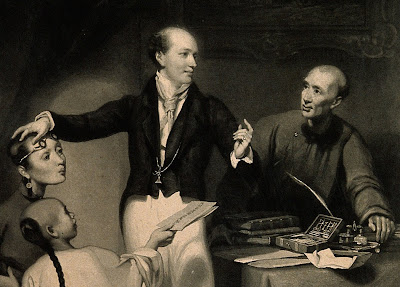 Group portraits include the aquatint of Thomas Colledge (1796-1879) operating in his eye-surgery in Macao established in 1827 (above and top), and the oil painting On Dent’s Verandah (1842-1843, private collection), in which three men (French, American and British) involved in opium trading with Thomas Dent and Co. (rivals of Jardine Matheson) lounge in the humidity of Macao with a prominent opium poppy in the foreground. This will surely end up in one of the great public collections.

The landscapes show the fine Portuguese baroque churches of Macao (São Lourenço and the Jesuit church of São Paulo depicted before and after the fire of 1835) standing above the hustle and bustle of typical Chinese streets. A DVD Chinnery then and now cleverly juxtaposes Chinnery’s street scenes with photographs of the same places in Macao as they appear today. A bridge at Honam (Canton) was painted at the request of the physician Thomas Boswall Watson, himself an amateur artist, who as a doctor would later perform an autopsy on Chinnery’s body.

However, for any one familiar with Hong Kong, the most heart-stopping moment will be the last item in the exhibition: a drawing of Hong Kong made during a six-months visit in 1846, towards the end of Chinnery’s life. After only five years of western ownership, the palatial headquarters of the great trading firms are already in place on the harbour front and are creeping up the hill – the start of the Hong Kong business building boom.

This drawing, like others by Chinnery, is inscribed by him in Gurney shorthand (his father was a teacher of it). At present the Colledge print is the only item in the Wellcome Library catalogue under Chinnery’s name, but there are many uncatalogued drawings in the Library, and an eye should be kept open for drawings of East Asian subjects with shorthand annotations using this system – they are likely to be Chinnery’s.

In Macao a street is named Rua George Chinnery in his honour, and in 1974 a trilingual inscription in English, Chinese and Portuguese was added to his tombstone to mark his 200th birthday. The exhibition is equally a fitting tribute to Chinnery’s talent as a recorder of people and places, and shows that, given the right choice of subject, a modest exhibition space can provide as enriching an experience as any blockbuster.

For more on the exhibition see Brian Sewell’s review in the London Evening Standard, 1 December 2011: he reproduces On Dent’s Verandah. [1]