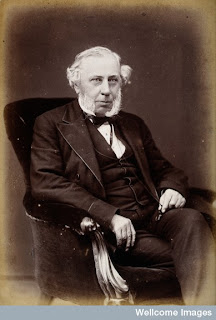 Today marks the 160th anniversary of the opening of the Hospital for Sick Children at Great Ormond Street, London.  As such, we felt we couldn’t let the anniversary pass unnoticed, particularly as the range of material held by the Wellcome Library on the hospital cuts across so much of our collections: whether this be archive material, books, images (of all kinds, as we’ll see below) and films.

Key to the opening of the hospital were the actions of Dr Charles West.  Trained in France and Germany, where children’s hospitals had long been in operation, West’s book How to Nurse Sick Children (first published in 1854), made the case for children’s hospitals in England and particularly in London.  West won support from a number of philanthropists and prominent health experts (including Baroness Burdett-Coutts and Edwin Chadwick) and enough backing was obtained for the Hospital – with ten beds – to open at 49 Great Ormond Street in February 1862. 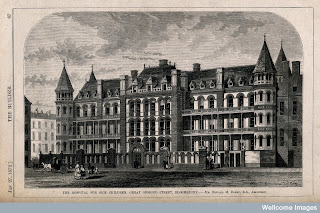 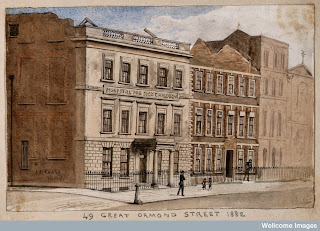 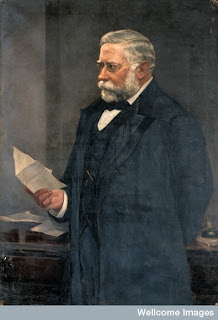 Shown here is Sir Thomas Barlow, whose papers are held in the Wellcome Library.  Physician to Queen Victoria, Edward VII and George VI and Barlow was an expert in childhood diseases (in particular infantile scurvy).  He was appointed medical registrar at the Hospital for Sick Children in 1874, serving there in different roles until 1899.  The Hospital served as the location for his research, as his papers testify.

Given the themes of his novels, it’s perhaps no surprise Charles Dickens was an early supporter of the hospital, as this item from our collections illustrates.  Indeed, as well as fundraising speeches and strenuous performances, Dickens raised the profile of the hospital through a number of articles he wrote for his magazines Household Worlds and All the Year Round.  The hospital even makes an appearance in one of Dickens’s late novels, Our Mutual Friend (1864-65).However, the most famous literary figure associated with the Hospital is not Dickens, but the Scottish author and playwright J M Barrie.  In 1929, Barrie donated to the Hospital the copyright of his most famous work Peter Pan.  In one of the more surprising additions to our collections, these lantern slides give an indication of how Barrie’s creation was interpreted in the 1900s (a version of these slides has been uploaded to YouTube).

To conclude this brief post, we must move outwith the collections of the Wellcome Library and mention the Historic Hospital Admission Registers Project (HHARP).  Although HHARP now includes details of admissions to three other children’s hospitals (Evelina Hospital; the Alexandra Hospital for Children with Hip Disease and and the Royal Hospital for Sick Children, Glasgow) arose from work to create a database of late 19th century and early 20th century admissions to Great Ormond Street.  As well as the rich details provided by these medical records, HHARP also includes histories on all the hospitals it includes records from, a handy glossay of medical terms and contextualising detail on the growth of children’s hospitals in the nineteenth century.

One Response to 160 years of Great Ormond Street Hospital