A treat at the Chester Beatty Library in Dublin

By William Schupbach | Events and Visits, From the Collections

Only a few more days for readers in Ireland to see the exhibition China through the lens of John Thomson: 1868-1872, which comes to an end at the Chester Beatty Library in Dublin on Sunday 26 February, before moving on to Northern Ireland.

The Chester Beatty Library is a gem in its own right, with valuable and exquisite works displayed in two permanent exhibitions: one covering the principal religions of the world and the other the arts used in the making of books, including printmaking and painting. 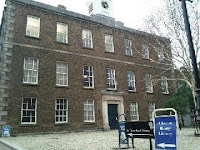 The latter starts with a magnificent George Stubbs mezzotint of a tigress, acquired in 2007 from the Christopher Lennox-Boyd collection. Other prints of particular interest include etchings by 17th-century masters such as Abraham Bosse, Jacques Callot and Antonie Van Dyck. A collection of etchings by Romeyn de Hooghe (1692) of King William III’s return from Ireland to Holland is a work by the anatomist and courtier Govaert Bidloo. A rare book illustrated by Raoul Dufy, Mon docteur le vin(Paris 1936), claims that wine prevents appendicitis by killing germs in the intestines and resists typhoid, infant sicknesses, and diabetes (the WellcomeLibrary has the 2003 English translation).

A remarkable story is told by a box of Manichaean manuscripts which were entrusted to a conservator in Berlin in the 1920s, were removed to Leningrad in 1945, went back to East Germany in the 1960s, and finally returned to the Chester Beatty Library after 1990. Among the most recent works is a print of the physician and fable-writer Lu Xun (1881-1936), of whom the Wellcome Library has also recently acquired a portrait: the portrait in the Chester Beatty Library (by Wu Biduan, 1998) is appropriately a woodcut, as Lu Xun championed the woodcut technique as the medium of the people.

The other exhibition, Sacred Traditions, also contains many works which have their counterparts in the Wellcome Library, such as Burmese parabaik and Jain cosmological paintings – as well of course as splendid Qur’an manuscripts and other unique works. 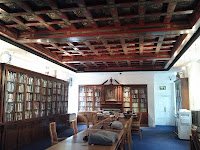 The John Thomson photographs on exhibition until Sunday complement the Chinese collections of the Chester Beatty Library, which shows its own related objects in showcases in the exhibition: they include a Chinese lady’s shoes and 19th-century Chinese spectacles similar to those shown in the photographs. Outside the exhibition, the reading room of the Library has a fine Chinese lacquer ceiling(right) acquired in China by Chester Beatty, the founder of the Library.

Here’s an article by the Irish travel writer Manchán Magan in the Irish Times about Chinese students from Birmingham visiting the exhibition in Dublin “to see their ancestors in the Chester Beatty Library”. Admission is free, opening hours here, location here.