Alan Turing and the Ratio Club 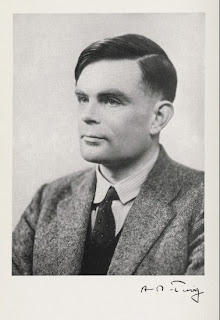 Last week Alan Turing (1912-1954) was in the news when the government rejected an e-petition to grant him a posthumous pardon for his conviction for ‘gross indecency’ in 1952, as a result of which he was subjected to debilitating experimental hormonal ‘treatment’ and eventually committed suicide by cyanide.

Given Turing’s fields of interest, mathematics and computational science, it might not be expected that there would be anything about him among the archival collections in the Wellcome Library: but in fact in the autumn of 1949 the neurophysiologist John A V Bates, whose papers we hold, invited him to join an interdisciplinary dining club, known as the Ratio Club, consisting half of biologists (mainly neurophysiologists) and half of engineers and mathematicians, all with a common interest in developments in cybernetics (Bates to Turing, 22 Sep 1949, GC/179/B.2).

Turing declared himself ‘honoured’ at the invitation, although, since he was based in Manchester and the club met in London, he was ‘unlikely to be able to attend many meetings’ (Turing to Bates, 9 Oct 1949, GC/179/B.3).

The Club files include a draft of Bates’ letter to Turing’s mother on hearing the news of his death:

Alan used to come to our meetings when he could. Whenever he spoke he added something original, and he did it with much humour and authority. We have altogether the happiest memories of his visits, and we are very upset that we shall not see him again.

I have been asked at the meeting this evening, to write and tell you of our feeling of great personal loss, and of our profound sympathy with yourself and the rest of his family in bearing the burden of this tragedy. (Bates to Mrs Turing, draft, 17 Jun 1954, GC/179/B.17)

There is a handwritten letter of response from Mrs Turing, expressing her belief that her son’s death was due to ‘misadventure’ (E Sara Turing to Bates, 7 Jul 1954, GC/179/B.17), as well as a copy of the printed circular that she sent round, arguing that he had got the cyanide on his fingers whilst performing an experiment and transferred this accidentally to the apple he then ate (printed circular, Jun 1954, GC/179/B.24). She wrote subsequently to Bates asking if he, and any other friends and colleagues, could contribute any letters, information or anecdotes for the biography of Alan she was writing (E Sara Turing to Bates, 12 Nov 1956, GC/179/B.24).