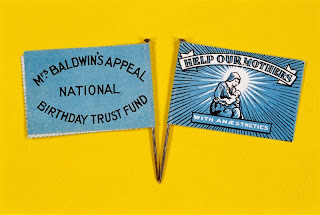 It is good to see that the Voluntary Action History Society’s drive to raise awareness of, and provision for, the necessity to preserve the archives of this important sector, is receiving attention: Wanted: Champions to safeguard the archives of our charities.

Archives of voluntary bodies in the medical and health sphere have long been a concern of Archives and Manuscripts in the Wellcome Library. When the Contemporary Medical Archives Centre was set up in 1979, it soon became very apparent that the preservation of records of organisations and associations was at least as pressing as the collection of papers of individuals.

While a number of our holdings of records of organisations, dating back to the eighteenth century, relate to professional bodies, some of which, such as the Sydenham Medical Club, appear to have been largely about doctors having a convivial time with professional peers, or organising regular conferences on matters of mutual interest, others, such as the Chartered Society of Physiotherapy or the Queen’s Nursing Institute, played an important role as certifying and regulatory bodies in developing areas of health work.

Our online sources guides provide an overview of our holdings on Medical Charities and Pressure Groups, as well as a range of International Organisations, a sector perhaps even less well-provided for in terms of archival survival than nationally-based institutions.

Recently catalogued collections in this area include organisations for patient activism, such as the Patients’ Association and the Genetic Alliance, and also records of the London Food Commission which form part of the papers of its founder, Tim Lang.