Conservation In Action: Folios from the The Shahnama

The Wellcome Library holds 20, highly illustrated, loose folios from The Shahnama or “Book of Kings”. The Shahnama is the longest poem ever written by a single author: Abu’l-Qasim Hasan Firdausi. His epic work narrates the history of Iran (Persia). One of the chief ways in which the text could be appropriated, was by commissioning illustrated manuscript copies of the poem, the earliest known illustrated texts dating from c. 1300. The copies held at the Wellcome have been dated from between 18th century and 19th century, with at least two different hands visible in the work.

Following the return of one folio from this series, from being on loan, a decision was made to treat the entire series. The added considerations were their historical significance, research value and the increased levels of interest in the items.

19 of the 20 folios are pasted down to a backboard with a window mount adhered directly onto the primary support. 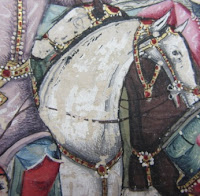 All items had varying degrees of pigment loss, most prevalent in the white or containing pale pink/blues pigments.  This can be seen in the white of the horse in this image (Folio Qcc2664.13).

After documentation and photography, each item was surface cleaned lightly around areas without media.  It was then tested under magnification for flaking, lifting or powdery pigment and the details were recorded. 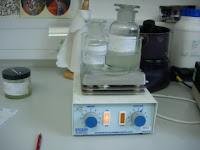 A variety of adhesives needed to be tested to determine the most effective consolidant to readhere the flaking media.  I carried out the testing of these adhesives for strenght, ease of application and degree of visual change after application (shown are some of some of the consolidants tested).

Based on current practice, through a literature search, the application methods that were chosen were two fold: by brush, under magnification, for treating small areas with lifting or unstable media, and with a nebulizer, for treating the large areas of cracking, lifting or unstable areas.  All areas consolidated, and materials used, were logged on the Wellcome’s Conservation Database. 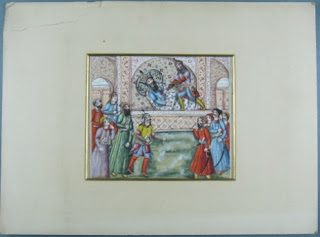 All but one of the folios were adhered to a heavy weight back board.  On the verso of these some have text.  After discussion with the curator it was agreed that the minature may have been attached to the backboard during its creation and should remain.  The window mounts, however, were agreed to be 20th century and certainly western.  The board was acidic and cracking and it was decided that these window mounts should be removed (this image of folio Qcc2640.4 shows where the mount board had cracked in the top left corner).

When completed all folios were mounted into a heavy weight deep conservation mount, cut to a standard size, with an over mount to protect the pigment from any further damage.  As researchers will need access to the verso of the mounts, where there is text, an additional window has been cut on the back board and folio protected from damage with a sheet of melinex. 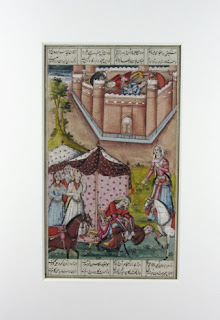 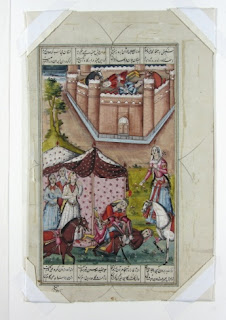 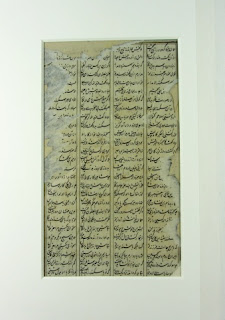 How to protect original works during digitisation

Behind the Scenes conservation digitisation

Conservation in action: a 16th century print gets a makeover