Faking it in the world of manuscripts has a long, if not exactly distinguished, history.  Given the determination of ingenious fraudsters to play intellectual havoc with documentary evidence over the centuries, and the voracious collecting habits of the Wellcome Library’s founder Henry Wellcome, it isn’t surprising that the library turns out to have played its own unwitting part in the art of forgery.

We can’t lay claim to having discovered a fraud on the scale of the Hitler diaries hoax, but social historian of food culture and professional chef Ivan Day has recently unmasked an intriguing fake amongst our collection of 17th-century recipe manuscripts. 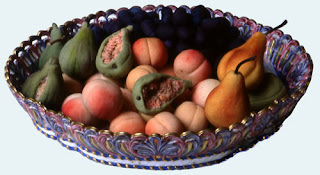 Acquired by Henry Wellcome in 1931, Grace Acton’s short recipe book (MS.1) has long perplexed researchers and archivists with its strange handwritings, recipes and lack of obvious purpose.  Ivan has now analysed the text and script of the volume to reveal that it is most likely a 17th-century notebook used by a 19th- or early 20th-century forger to create a ‘Carry On Banqueting’-style recipe collection.
The identity and motivations of the forger are unlikely ever to be discovered, but Ivan’s research sheds valuable light on a curious and problematic volume.