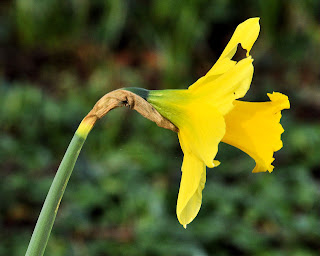 In honour of St David’s Day, the national day of Wales, today we focus on one of the Library’s Welsh holdings.

One of the fascinations of archive material in particular is the way that it makes things specific: takes large, overarching topics and presents them in terms of particular instances, anchored to real people and real places. Today, of course, we will be looking at an item that takes us to Wales: to Rhagatt Hall in the valley of the River Dee / Afon Dyfrdwy, just downstream of the small town of Corwen. 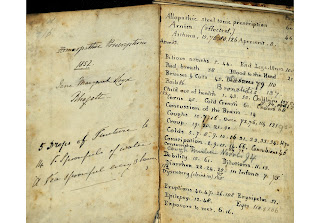 Over the years this blog has featured extensive coverage of the Library’s seventeenth century recipe books. Those are, however, simply the tip of the iceberg: manuscript recipe books continued to be compiled throughout the eighteenth century and on into the nineteenth, finally beginning to fade from common use in the second half of the century (although they are by no means extinct even now). Like the seventeenth-century volumes, these later examples mingle medical, culinary and household management instruction, in varying proportions according to the compilers’ preoccupations. Their main point of difference from the earlier books is in their greater use of printed cuttings: as time passes we see people less willing to transcribe every recipe in longhand, when they can cut out something from a printed source and paste it into the recipe book, and some from this late period are composed almost entirely of cuttings. 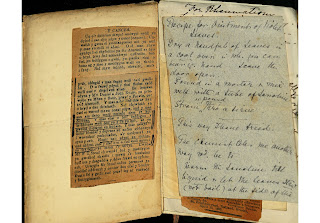 Today’s Welsh item is a recipe book from this late period. MS.8459 is a small volume containing some 130+ pages of medical recipes and other very assorted material, which was formerly owned by Jane Margaret Lloyd (1822-1912) of Rhagatt Hall, daughter of Edward Lloyd of Berth and Rhagatt, and Frances Madocks, daughter of John Edward Madocks of Fron Iw, Denbighshire. It is unclear whether she had the volume compiled or simply came into ownership of it at some stage. Within the volume are recipes for medicines, including homoeopathic ones, and some reports on experiences of their use; there are also recipes for the treatment of cats and dogs. Inserted items include prescriptions: one, dispensed by a chemist in Rhyl, is for a Mrs. Ffoulkes, probably Jane Lloyd herself, since in 1861 she married the Ven. Henry Powel 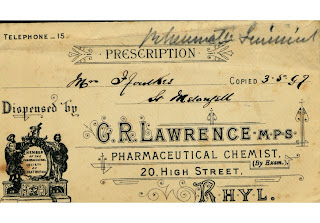 Ffoulkes, archdeacon of Montgomery. There are various cuttings, including at least one in Welsh, the latter forming part of a collection of material on the use of violet leaves to treat cancer. Another cutting provides the lyrics to some popular songs, one of which – “The Lum Hat” – takes us into the realm of broad Scots dialect. Finally, taking us a very long way from Wales indeed, there is an invitation from the Officers and Council of the Japan Society to a Mr Herbert Tinker, asking him to an event also attended by His Excellency the Japanese 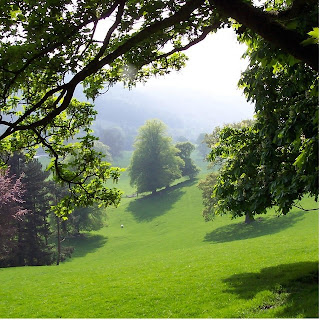 Minister in the United Kingdom (this would be Count Hayashi Tadasu, who served as Minister from 1900 to 1905 and then as Ambassador for a further year). The presence of the last item, without any explanation, is evidence of the sheer unpredictability of archive material!

Archive material may be unpredictable: but one thing that one can predict, without much fear of contradiction, is that the Library’s holdings are sufficiently various for pretty much any subject or part of the world to be represented somewhere in them. This one item is, of course, just a little sample of our Welsh material: the full list of hits on the words “Wales” and “Welsh” in the archives catalogue comes to over 8000. (Our sources guides on British Local History and Topographical Photographs provide a more manageable introduction.) On this day of all days, have a look through them.