Item of the Month, March 2012: ‘How the Department of Health of the city of New York is fighting tuberculosis’

To mark World TB Day 2012, we’re travelling back to the United States at the turn of the 20th century to look at tuberculosis prevention in New York.

In 1882 Robert Koch announced his discovery of the tuberculosis bacillus, formally placing pulmonary tuberculosis (or consumption) among other communicable but preventable diseases. Responses to this varied. In New York the sanitary authorities didn’t make any major steps towards sanitary regulation and prevention using Koch’s work until 1894.

Hermann Michael Biggs (1859-1923), M.D. and from 1902, New York General Medical Officer, had initiated concerns and started a campaign to change the local approach to stopping the disease as early as 1887 when he was a consulting pathologist, urging notification, registration and surveillance of the disease as well as education of the public involving leaflets, press, exhibitions and lectures.

These measures were all brought in eventually and disinfection was additionally suggested as a vital part of the campaign as well as free sputum analysis tests offered by the Dept. of Health’s bacteriological laboratory. Epidemiological cluster studies recorded on maps showed where local concentrations of the disease were, enabling targeting of available health resources.

This new approach caused angry controversy within the medical profession, but continued. In 1896 land for a tuberculosis sanatorium was bought at Otisville, 75 miles away in the Shawangunk mountains, offering free treatment for New York City residents. Special tuberculosis wards were set up in one of the New York Hospitals in 1903. Specialised clinics were opened with trained staff between 1904 and 1907. 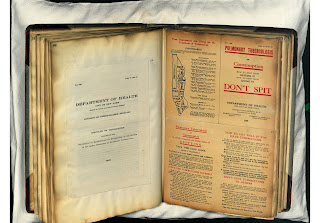 A scrapbook of 134 pages with 116 items of assorted stationery pasted into a continuous narrative about the city’s battle to prevent and control tuberculosis was compiled specially for the 1908 conference on tuberculosis in Washington, D.C. A footnote on the title page would appear to indicate that “250 sets” were produced. The Wellcome Library has one of these scrap books in its printed medical ephemera collection.

The scrapbook includes ‘A brief history of the campaign against tuberculosis in New York City’ by Biggs and preserves a very comprehensive range of campaign publications which includes simple forms, cards, envelopes, letterheads as well as samples of the pamphlets and leaflets that were distributed to people. The material is primarily in English, but with certain items translated into other languages reflecting the diverse ethnic population of New York City in 1908. 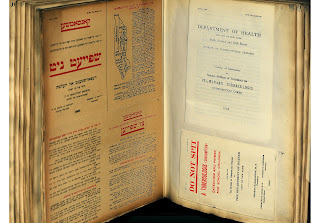 Four small maps also show detailed epidemiology of the disease, building by building in Lower New York in 1894-1898 and 1899-1908. Procedures for sanitary supervision and registration are given in detail with the relevant forms pasted in situ. Leaflets used in the campaign are here in a variety of languages explaining what the disease is, how it is spread (spitting is given as the chief cause), the importance of hygiene (disinfection and fumigation), what hospital and other health services were available to people and the need to report cases to the authorities. Information for health professionals is also included. The work of the bacteriological diagnosis laboratory is outlined as are the procedures for the collection of sputum samples.

The book documents a turning point in how tuberculosis was treated in New York and also the efforts of Hermann Biggs, fighting against the authorities to get them to change their approach in the light of Koch’s recent discoveries.
Tuberculosis features throughout the Wellcome Library’s collections. A general search in the online catalogue will yield much more in the way of books, journals, pictures and ephemera: this sources guide outlines our manuscripts and archive collections pertaining to the disease. [2]

Images:
– Hemrnan Biggs, (From ‘Plagues and People’ website University of California, Irvine)
– Images from ‘How the Department of Health of the city of New York is fighting tuberculosis’ scrapbook

[1] It had previously been in the Medical Department Library of the British Local Government Board, responsible for overseeing administration, public health, sanitation etc. at a local level in England and Wales between 1871 and 1919 when it was abolished by the Ministry of Health Act.

[2] The Ephemera Collection in particular has numerous examples of colourful Christmas fund-raising stamps or seals from around the world which were sold every year to raise money for charities working with people suffering from TB. They had no postal value but made Christmas card envelopes look brighter and more cheerful. Many countries funded services and help for people with tuberculosis by placing a small surcharge on their actual postage stamps once a year. The money raised by this went specifically to help organisations and charities. We have many of these and they can be found within the Wellcome Library’s stamp collections.