The ‘Orphans’ go for a short walk 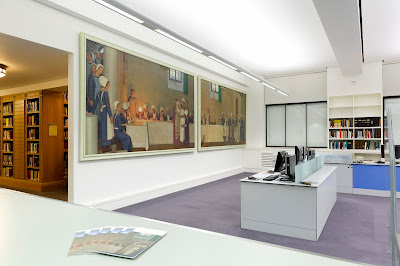 In 2009 the Wellcome Library acquired four large paintings known as the Acts of Mercy. They had been painted by Frederick Cayley Robinson between 1915 and 1920 for display in the Middlesex Hospital, in the Fitzrovia district of central London. The Middlesex Hospital building was demolished in 2005 (except for its chapel, which still stands), and its assets, archives and responsibilities passed to the University College London Hospitals NHS Foundation Trust. The paintings, being homeless, were then acquired by the Wellcome Library. From the Wellcome Library they were lent in 2010 to the National Gallery for a temporary exhibition focused on them and their painter. More information about the paintings is available in several postings on this blog.

University College London Hospitals NHS Foundation Trust is now constructing a new cancer hospital, the UCH Macmillan Cancer Centre, in Huntley Street, London, south of the present University College Hospital and not far east of the site of the demolished Middlesex Hospital. ‘The Orphans‘, one of the two pairs of paintings by Cayley Robinson that make up the Acts of Mercy, is being lent to the new cancer hospital, which will open next month, in April 2012. There is a certain appropriateness in the loan because the former Middlesex Hospital had a longstanding interest in, and reputation for, the treatment of cancer. [1]

That tradition went back to 1791 when a surgeon called John Howard sent a letter to “the medical gentlemen of the Middlesex Hospital” proposing that a ward be opened for “paupers afflicted with the disease called cancer”. The purpose of this initiative was twofold: to afford relief to the patients and to investigate the causes of cancer. For the relief of patients, an out-patient as well as an in-patient service was suggested. For the purposes of investigation, Howard suggested that notes on cases be kept carefully and made available “to any intelligent or scientific person”.

Howard was invited to put his proposals to the Middlesex Hospital Board: he not only did so but also produced an anonymous sponsor who was prepared to pay 3,000 guineas towards the costs. The hospital governors accepted the offer, and the ward opened in 1792. A few years later the sponsor was revealed to be the (by now deceased) Samuel Whitbread (1720–1796), the Bedfordshire brewer whose brewery was based in Chiswell Street in the City of London.

Whitbread’s funds created the Cancer Charity, which has been described as “the centre and inspiration of the researches into malignant disease which have flowed from the Middlesex Hospital ever since.” In 1914 the Barnato-Joel trustees endowed it with funds to build a new research laboratory. It was absorbed into the Middlesex Hospital’s radiotherapy department in 1937. Both before and long after that date, many distinguished researchers, surgeons and physicians carried out at the Middlesex Hospital work towards the two objectives of the charity, relief of cancer patients and advancement of understanding of cancer.

It is that tradition of the Middlesex Hospital that will be continued in the new UCH Macmillan Cancer Centre in Huntley Street. It is remarkable that three specific features of John Howard’s proposal to the Middlesex in 1791 are retained in the new building: out-patient treatments, in-patient facilities, and (in collaboration with the UCL Cancer Institute on the other side of the road), making the results of research available by open access publishing. As in the former Middlesex Hospital entrance hall, Cayley Robinson’s ‘Orphans‘ will be watching over patients in the atrium of the new building.

The other pair of paintings that makes up Acts of Mercy will remain in the Wellcome Library, and after 8 March 2012 will be redisplayed on facing walls, as Cayley Robinson originally intended. However, anyone wishing to see the four paintings together should revisit the Wellcome Library before that date for a last view of the quartet.