Easter week celebrates the moment when, in Christian metaphysics, mortality is overcome by everlasting life. The crucifixion of Jesus Christ redeems mankind from the sinful state into which mankind fell through Adam’s disobedience to the will of God in the garden of Eden. His resurrection liberates us from eternal perdition: in Saint Paul’s famous words (I Corinthians, XV.54-55) “So when this corruptible shall have put on incorruption, and this mortal shall have put on immortality, then shall be brought to pass the saying that is written, ‘Death is swallowed up in victory’. O death where is thy sting? O grave where is thy victory?”.

These concepts were articulated with fresh force in the later sixteenth century through the Counter-Reformation, in media such as altarpieces, sermons, the educational work of the Jesuit Order, and through devotional prints which were widely disseminated. Here we present four such prints from the holdings of the Wellcome Library. 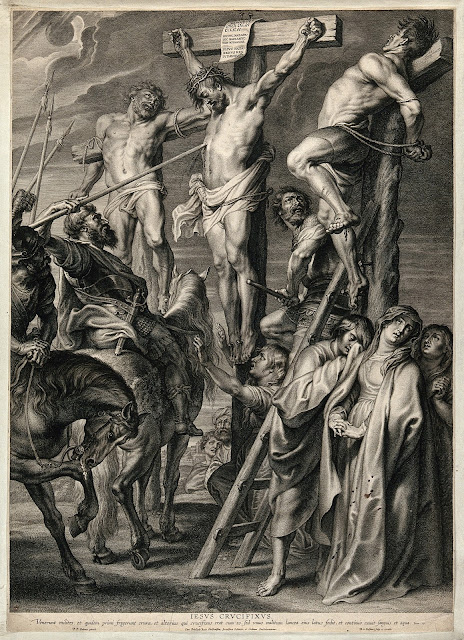 Engraving by B. van Bolswert after Rubens. Wellcome Library no. 24606i.

The print above publishes an altarpiece painted for a church in Antwerp in 1619-20. The lettering names Pieter Paul Rubens as the painter, and Boëce van Bolswert (in Latin, Boethius à Bolswert) as the engraver and printer. Bolswert (ca. 1580-1633) worked in Antwerp in collaboration with the Rubens studio. The lettering describes the scene in the words of Saint John’s gospel (XIX.19-34), which is also closely followed in the depiction. 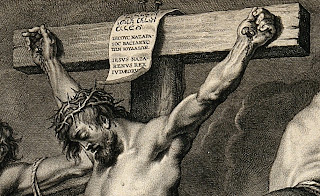 For instance, Saint John mentions that the mocking inscription on Christ’s cross “was written in Hebrew and Greek and Latin” (XIX.20), as it is here. The print also illustrates an act of casual cruelty which is described by Saint John: the soldiers broke the legs of the two men crucified with Jesus, but when they got to Jesus himself, they saw that he was already dead so did not waste any effort in breaking his limbs. Thus the print emphasizes the sinfulness of mankind and its need for the “corruptible to put on incorruption”.

The altarpiece was seen in Antwerp in 1781 by the painter Joshua Reynolds. He describes it as “famous”, meaning that it was widely known from  Bolswert’s print. He commented in his diary:

The altar of the choir is the famous crucifixion of Christ between the two thieves, by Rubens. To give animation to this subject, he has chosen the point of time when an executioner is piercing the side of Christ, whilst another with a bar of iron is breaking the limbs of one of the malefactors, who in his convulsive agony, which his body admirably expresses, has torn one of his feet from the tree to which it was nailed. The expression in the action of this figure is wonderful: the attitude of the other is more composed; and he looks at the dying Christ with a countenance perfectly expressive of his penitence. This figure is likewise admirable.

‘The Virgin, St. John, and Mary the wife of Cleophas are standing by with great expression of grief and resignation, whilst the Magdalen, who is at the feet of Christ, and may be supposed to have been kissing his feet, looks at the horseman with the spear, with a countenance of great horror: as the expression carries with it no grimace or contortion of the features, the beauty is not destroyed. This is by far the most beautiful profile I ever saw of Rubens, or, I think, of any other painter …

‘The genius of Rubens nowhere appears to more advantage than here: it is the most carefully finished picture of all his works. The whole is conducted with the most consummate art; the composition is bold and uncommon, with circumstances which no other painter had ever before thought of; such as the breaking of the limbs, and the expression of the Magdalen, to which we may add the disposition of the three crosses, which are placed prospectively in an uncommon picturesque manner: the nearest bears the thief whose limbs are breaking; the next the Christ, whose figure is straighter than ordinary, as contrast to the others: and the furthermost, the penitent thief: this produces a most picturesque effect, but it is what few such a daring genius as Rubens would have attempted. . . . I have dwelt longer on this picture than any other, as it appears to me to deserve extraordinary attention: it is certainly one of the first pictures in the world, for composition, colouring, and, what was not to be expected from Rubens, correctness of drawing.’

Although Reynolds’s appreciation is primarily technical, written from the point of view of a professional painter, his feeling for the subject matter is also strongly expressed. In the 19th century the composition continued to be well known under the name Le coup de lance given to it in 1876 by the French painter Eugène Fromentin. Even today some writers call it Le coup de lance, even though many other incidents are shown in addition to the centurion piercing Christ’s side with the lance. Although the lettering on the print and other evidence state that the author was Pieter Paul Rubens, there are reasons for thinking that, while Rubens designed the composition, his pupil Antonie Van Dyck may have been responsible for some of the detailing. [1] The painting now belongs to the Koninklijk Museum voor Schone Kunsten, Antwerp.

At some stage Christ’s body had to be taken down from the Cross. An episode after that, known in English by the Italian word Pietà, in which the Virgin Mary mourns her son, is recorded in many pictures and sculptures. 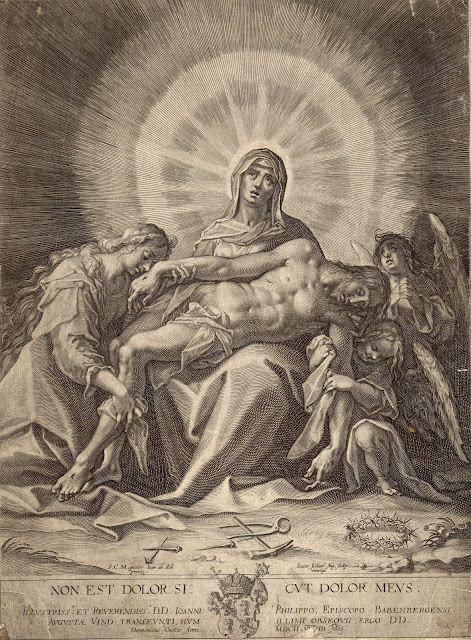 This is one of the most finely worked prints of that subject. It is a truly international production. The designer was Hans von Aachen (1552-1615) who was born in Cologne, worked in Italy where he learnt a good deal about painting and design, and eventually became court painter to the Emperor Rudolf II in Prague, where he died. Our print is dated 1602, when Hans was in Prague. It bears a dedication from Dominicus Custos (the printer and/or publisher), dated to the day: “MDCII. VIII. Id. Maÿ”, i.e. 8 May 1602. The dedicatee is Johann Philipp von Gebsattel (1555-1609),  Prince-Bishop of Bamberg from 1599 to 1609, not a man renowned for piety, which is perhaps why he was glad to be recognized as the patron of this magnificent print. He could hardly fail to be impressed by the engraver’s work on the Virgin’s halo. The engraver was the stepson of Dominicus Custos, Lucas Kilian, who was from Augsburg in Bavaria but carried out the work for this print in Venice.

The episode is not mentioned in the Gospels but became one of the standard Stations of the Cross in the Middle Ages. Evidently it was thought necessary to have a time for grieving between the killing of Christ and his burial. The Virgin’s expression is one of bewilderment, while Mary Magdalene devotes herself to the wounded body of Christ. In the foreground are the causes of the sacred wounds, including the nails, a hammer, and the crown of thorns. 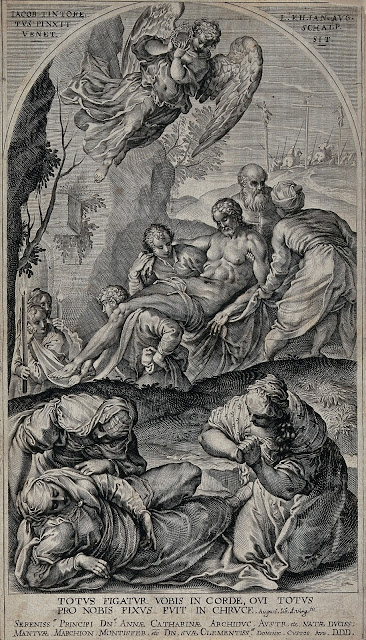 The carrying of Christ’s body to the tomb is shown in another print made by Lucas Kilian, again in collaboration with his stepfather Dominicus Custos as printer and/or publisher, but this time Lucas is engraving a design by a Venetian painter, Jacopo Robusti, called il Tintoretto. The patron to whom the print is dedicated is also Italian:  Anna Caterina Gonzaga (1566-1621), daughter of Guglielmo Gonzaga, Duke of Mantua, and at this time the consort of her uncle, Ferdinand II, Archduke of Austria. Unlike the Prince-Bishop of Bamberg, she was indeed renowned for her piety: as a child she had received visions of the Virgin, and after her husband’s death she abandoned the trappings of wealth and devoted herself entirely to religion and good works.

It is clear why the archduchess would have been happy to be associated with an engraving in which the suffering Virgin Mary is literally so prominent: the three Maries are almost falling out of the front of the picture, with the Blessed Virgin in the centre, Mary Magdalene on the right and Mary the wife of Cleophas (John XIX: 25) on the left. Remarkably, what we might regard as the main subject, the carrying of the body of Christ, appears only in the background. The reaction of the Virgin to the sight of Jesus’s body implies that a distinct earlier phase corresponding to the Lamentation or Pietà did not take place. 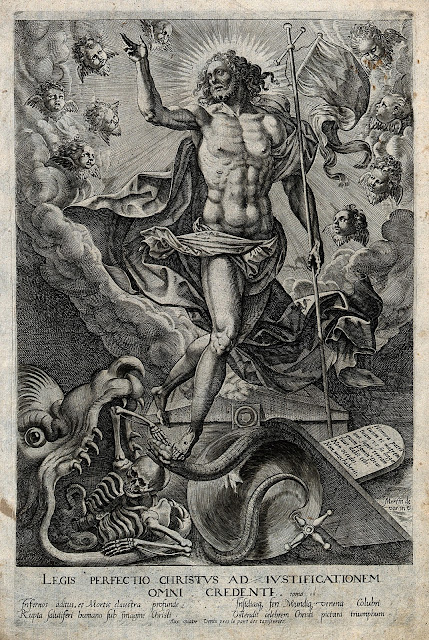 Finally in this sequence, we have the powerful figure of Christ triumphing over death. The upper part combines two scenes: Christ is simultaneously resurrected from the tomb and ascends into heaven. In the lower left corner, Death itself is about to be swallowed up by a monster, while in the centre the snake that led Adam and Eve astray, and who is entwined around the secular world, is about to be trampled down by the wounded foot of Christ. On the right a tablet engraved with the Ten Commandments faces upwards, indicating that Christ is triumphing over righteousness of the law, replacing it with righteousness of faith.

Thanks to Erika Delbecque for cataloguing the Wellcome Library’s prints by Lucas Kilian.