Item of the Month, April 2012: ‘On Indigenous Malaria’

As today is World Malaria Day, our Item of Month for April focuses on one of the thousands of works the Library holds on the disease. 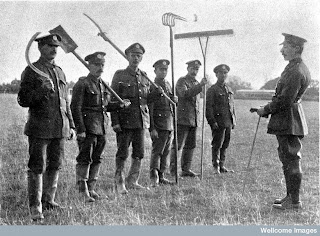 The term ‘Tropical Disease’ can be a misleading one. Take this image: in the book it comes from, the caption reads that it shows “a variety of tools used in anti-malarial work”. Given we think of malaria as the most familiar tropical disease, where in the world is the anti-malarial work taking place? Given the uniforms are of soldiers from the Royal Army Medical Corps, perhaps it’s a distant part of the British Empire? Surely somewhere south of the equator?

No – it’s from the English county of Kent.

The photograph is one of a number of images from a report entitled ‘On Indigenous Malaria and on Malaria Work performed in connection with the troops in England during the year 1918’ by Major Angus Macdonald, RAMC. It’s one of a number of reports collected together in a volume produced by the War Office, Observations on malaria by medical officers of the army and others, published in 1919 and edited by Sir Ronald Ross, then as now familiar for discovering the key role played by mosquitoes in the transmission of malaria.

Macdonald’s report acts as a reminder – perhaps a surprising one – that malaria was indigenous in the British Isles into the 20th century, particularly in the marsh land areas of Kent and Essex. Before the 19th century, terms such as “ague” and “marsh fever” would have been used to describe the malaria-like illnesses suffered by the local population. 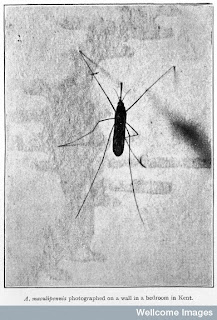 Macdonald’s report consists of the response of the Army to outbreaks of malaria in 1917 in areas such as Romney Marsh, Sandwich and Sheppey – in particular, in in its effects on soldiers stationed in Army camps in these areas.

The report describes in detail the soldiers who caught malaria in England in this period, contrasting them with cases of malaria amongst civilian population in Essex and Kent, and proving that the cases of malaria were locally transmitted. Macdonald also includes testimonies from local residents on previous outbreaks, offering up perspectives on the diseases stretching back to the nineteenth century: the locals give different reasons for a decline in ague during their lifetimes, ranging from the cutting down of elm trees to the coming of the railways.

Macdonald goes into detail on the link between the structure of watercourses in these counties and why they were ideal breeding grounds for different species of mosquitoes, before recording the record of sanitary operations in Sandwich, Sheppey and Lydd – under Macdonald’s supervision – which aimed to disrupt the mosquitoes breeding grounds. 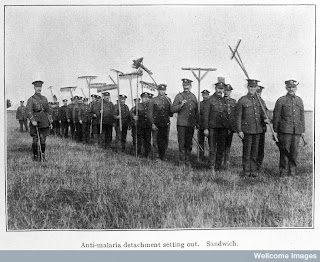 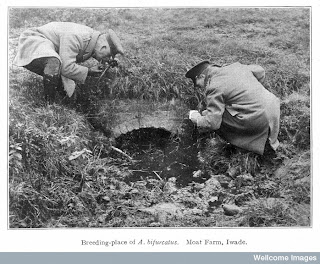 These methods – including lime washing stables, the drainage and the maintenance of dykes and swampy areas – resulted (for Macdonald) in a measurable decrease in cases of malaria amongst soldiers stationed in Kent. However, outbreaks in the county would continue, up to the 1950s. 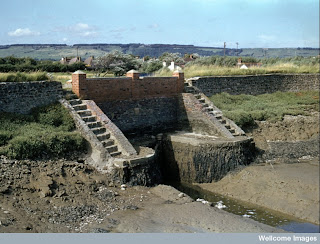 The contents of the War Office volume inadvertently point to an outbreak which would have a greater effect on health in 1919. The report which follows Macdonald’s in the volume is ‘Observations on the Pathology and Treatment of Malaria’ by R W Harold Row. It contains a prefatory note which hints at the pandemic the world was facing: “It is with deep regret that I have to report the death of Mr Harold Row from Influenza…”.

Images:
– ‘Shows a variety of tolls used in anti-malaria work’
– ‘A. maculipennis, photographed on a wall in a bedroom in Kent’
– ‘Anti-malaria detachment setting out. Sandwich’
– ‘Breeding-place of A. bifurcatus. Moat Farm, Iwade’ (all from the report ‘On Indigenous Malaria and on Malaria Work performed in connection with the troops in England’)
–  Romney Marsh drainage scheme: gate at low tide (c.1960s, photograph by Leonard Bruce-Chwatt.  Wellcome Images, W0010475) Wounds from the Battle of Waterloo