New article on a portrait of record

An exceptional neoclassical portrait drawing that was acquired by the Wellcome Library in 2010 is the subject of an article in the current (April 2012) issue of The Burlington magazine. [1] The drawing, by Pierre Chasselat (1753-1814), is a portrait of the French surgeon A.-B. Imbert-Delonnes who, in the same year as the creation of the drawing (1800), served under Napoleon at the battle of Marengo. He was also involved in a number of controversial episodes, some of which are commemorated in the drawing.

Following Marc Fecker’s identification of the previously unidentified sitter as Imbert-Delonnes, the article, by Marc Fecker and William Schupbach, places  the drawing in the context of other works by Chasselat and by Jacques-Louis David (they were both pupils of Joseph-Marie Vien), and identifies the various works of furniture, painting, and sculpture shown in the portrait, among them (in the lower left corner) an oval portrait of the mayor of Angoulême, Perier de Gurat. Perier de Gurat suffered from appalling facial tumours which Imbert-Delonnes removed through a long and painful surgical operation. The engravings below, published by Imbert-Delonnes, show Perier de Gurat before and after that operation. 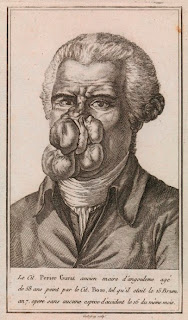 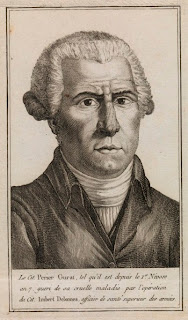 Above, Perier de Gurat before and after surgical removal of his tumours by Imbert-Delonnes in 1798/1799.
Plates to Ange-Bernard Imbert-Delonnes, Nouvelles considérations sur le cautère actuel, Avignon 1812. 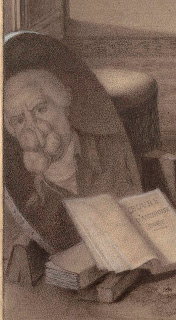 Here (right) is the detail from the lower left corner of Chasselat‘s drawing, showing the painting by Joseph Bose from which the first engraving of Perier de Gurat was made. The open book in front of it is a volume of the works of one of Imbert-Delonnes‘s professional role-models, Ambroise Paré (1510?-1590).

Other details of the drawing are elucidated in the article. The drawing was purchased by the Wellcome Library with the aid of the MLA/V&A Purchase Grant Fund and The Art Fund, to whom go the renewed thanks of the Library.