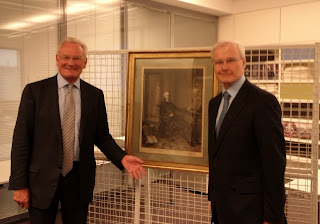 The Wellcome Trust was honoured to receive a visit today by H.E. The French Ambassador, M. Bernard Emié. Among the items shown to him was the most splendid of the Wellcome Library’s recent French acquisitions, the portrait of the surgeon A.B. Imbert-Delonnes by Pierre Chasselat, 1799-1800, which has been described elsewhere on this blog (here and here).

The Ambassador was interested to hear that the gigantic tumour shown in a glass jar on the right of the drawing had belonged to a Minister of Foreign Affairs in the young French Republic, Charles Delacroix.

Above, Sir William Castell (left), Chairman of the Wellcome Trust, shows the drawing to M. Emié.