We recently had the pleasure of sharing our Special Collections with Year 9 students from Little Ilford School in Newham as part of a science club run by Wellcome Collection’s Youth Programme.  Over the next few weeks we will be posting the students’ reflections on themes they explored at the library, so keep an eye out. Starting us off are Ben, Bilal, Lauren, Nicolas and Nicole.

Today my friends we are here to write about anatomy.  On 18th April 2012 we got to see archives hundreds of years old, which fascinated us, and learnt how anatomy developed as the years passed. 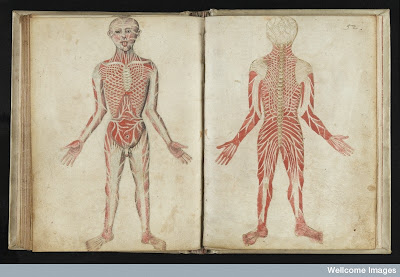 Human anatomy is looking at what makes up the human body: its structure, functions, layout and systems which keep us humans alive.  ‘Anatomy’ comes from the Greek word ‘anatemnein’ which means “cut up” and that was how anatomy was once discovered: cutting up corpses to see what was inside them.

We firstly studied two images of a human body drawn in the mid 15th century.  Human dissection was illegal then and so many people dissected animals. One of the most common animals that was dissected was the pig and so they believed that the insides of a human were identical to that of a pig.

Later we looked at a printed newspaper document of a trial that took place in the 1800s. The newspaper article talked about the conviction and execution of three men over the murder of a young Italian boy for the use of medical science.  This shows us how greedy people were becoming to learn and to know more about the body. 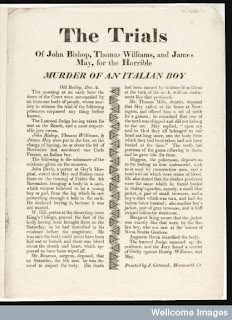 Initially, our first thoughts were that of shock because of what we know today, already having all this information at our hands.

But as we went on to discover and learn more, we began to think about it. What they did was to find out more about what they were, and how the body worked.  Without what they started we wouldn’t know as much about the body as we do today. So although we find it disgusting we have to be somewhat thankful.

After a while, a member of Wellcome Collection staff said “Thank god I’m alive now – you’ll know what I mean?”.  Well, first, we didn’t know what she meant but when she showed us the development of surgical apparatus… we understood.

Thank you for time, curious reader, as we must bid you farewell.  We think that Wellcome Collection is an astonishing place full of things on the history of medicine which will amuse and amaze you!

What do you think?

Posted on behalf of Ben, Bilal, Lauren, Nicolas and Nicole

(2) Handbill describing trial of John Bishop, Thomas Williams and James May for the murder of an Italian boy, 1831 (MS.7058)