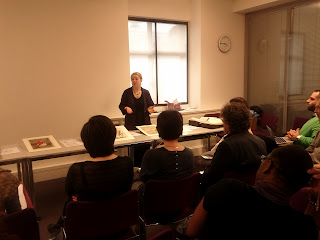 By their very nature, caricatures (in the sense of graphic works) distort the truth for humorous effect, but not quite enough to make their subjects unrecognizable. Quite how caricature artists have steered between the Scylla of distortion and the Charybdis of incomprehensibility was one of the questions explored in “Interpreting caricatures” at the Wellcome Library on 27 April 2012.

The event was the first in a series of “Masterclasses” intended to help with the interpretation of documents in the Wellcome Library, many (if not all) of which require a certain level of expertise for their understanding. Last week’s Masterclass was given by Professor Ludmilla Jordanova of King’s College London (above) and William Schupbach of the Wellcome Library, with participation from the fifteen people attending.

The meeting focused on caricatures in the Wellcome Library, and a number of points emerged. In the Wellcome Library the term “caricatures” is used to apply to distortions of events and situations as well as of persons. Some caricatures are satirical, others merely humorous without satirical intent. The Dutch caricatures of the financial crisis of 1720 (published in the compilation Het groote tafereel der dwaasheid) show the need to compare and contrast within a set of caricatures of the same subjects, and to link them with plays and poems. The print Modern moonshine, or the wonders of Great Britain (1774: above) shows that even with the aid of the internet and online reference sources, some caricatures still resist complete understanding. For British caricatures up to 1832, the catalogue records created by Mary Dorothy George are still fundamental.

Much can be learned not only by analysis and comparison but also by studying the penumbra of radiating allusions, and by taking account of the artists’ visual modes of expression (such as the dividing lines in A right hon.ble democrat dissected, 1793, right).

Some caricatures are valuable additions to an individual’s portraiture, as in the case of William Hunter. In others, subsidiary figures such as the chimney-sweep in Thomas Rowlandson’s A midwife going to a labour (1811) can be as important for social history and for telling the story as the principal figures (in this case the rumbustious midwife herself).

It is doubtful whether any of those attending failed to learn something new about caricatures, and new interpretations were put forward for several prints. Future Masterclasses will be announced on this blog.