Item of the Month, May 2012: ‘De historia stirpium commentarii insignes’

To mark the first international Fascination of Plants Day, May’s Item of the Month features one of the most important historical herbals from our collections

‘De historia stirpium commentarii insignes‘ (or ‘Notable commentaries on the history of plants’) by Leonhart Fuchs was published in Basel in 1542.  Fuchs was professor of medicine at the University of Tübingen and this large folio volume is a landmark among the many herbals published in the 16th century.

Systematic botany has its origins in medical science, since the careful study of the qualities and species of plants was the foundation for pharmacy.  Herbals listed plants and their medicinal properties and were based upon the work of the Greek Physician Dioscorides. Fuchs’s aim was to reproduce each plant from life, and he stated in his dedicatory epistle that ‘a picture expresses things more surely and fixes them more deeply in the mind than the bare words of the text’. Each illustration was therefore based upon the appearance of the living plant. 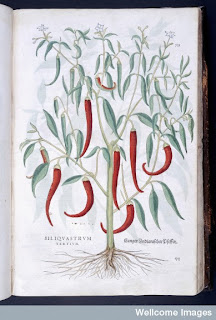 The work includes descriptions for about 500 plants – arranged alphabetically by their Greek names – including many recently discovered in the New World. The book includes the first published European depiction of the red chilli, which was brought back by Columbus in 1492 (though Fuchs describes the plant as a native of India).

The Wellcome Library holds two copies of the 1542 edition.  One – catalogued as EPB 66181/D – was formerly part of the collection of the Medical Society of London, which was deposited for safekeeping in the Wellcome Library in 1964. It was eventually purchased by the Wellcome Trust in 1984, with assistance from the National Heritage Memorial Fund and other charities. 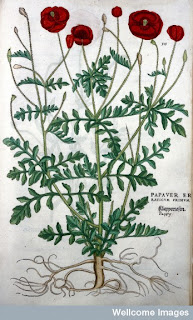 The other – images from which illustrate this post – is catalogued as EPB 2438/D.  This edition does offer some clues to its earlier provenance: before entering our collection, this copy was owned by an Englishman and if you look closely, you can see the word ‘poppy’ has been written underneath the German and Latin names.

As well as the illustrations of plants, the work includes some other notable images. These are portraits of Heinrich Füllmaurer, Albrecht Meyer and Veit Rudolf Speckle, the three men responsible for illustrating ‘De historia stirpium commentarii insignes’. 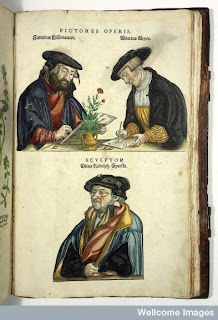 It was common to include a portrait of the author in a work but never the illustrator. However, in recognition of the work of the artists, in this instance they are granted this honour. Meyer (upper right) is shown drawing the design from a live plant, Füllmauer (upper left) is shown transferring the drawing to the woodblock, and Speckle, the engraver or sculptor, is shown below.

With thanks to Julianne Simpson