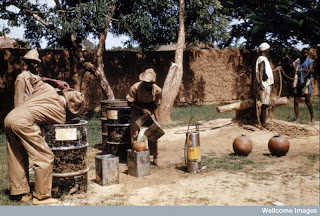 The distinguished malariologist Leonard Jan Bruce-Chwatt (1907-1989) summed up the feelings of many of his contemporaries when, in 1986, he wrote:

“We all know the main chapters of the sad saga of global malaria eradication and felt, often personally, the rise and fall of our hopes during the past 30 years.” [1]

Those involved in today’s major malaria initiatives seem likewise haunted by the fortunes of the large-scale malaria control programmes of the second half of the twentieth century. An overall lack of “progress” is analysed, attempts are made to draw “lessons” from the past, and bold ambitions for future eradication are greeted with a certain degree of caution.

For an insight into global anti-malaria endeavours from the advent of effective insecticides in the 1940s through the large-scale eradication campaigns of the 1950s and 1960s, and the disillusionment of the 1970s and 1980s, one could do worse than begin with an examination of the papers of Bruce-Chwatt himself, now available for consultation in the Wellcome Library (ref WTI/LBC). 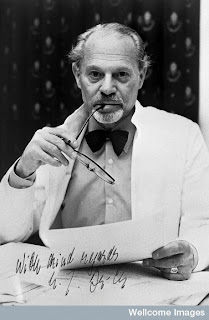 From 1949 to 1958 Bruce-Chwatt headed up the Federal Malaria Service of Nigeria, where he oversaw an early control project in Sokoto, in the north-west of the country. Reports and unpublished papers, maps, charts and photographs relating to this project are all contained within the collection.

In 1958 he moved to Geneva, then the epicentre of international malaria matters, and became Chief of Research and Technical Intelligence in the Malaria Eradication Division of the World Health Organisation. From this position, as a member of the WHO Expert Panel on Malaria (on which he served continuously from 1951 onwards), and later as a consultant, he was witness to the entire span of the Global Malaria Eradication Program launched by the WHO in 1955 and abandoned in 1969. By 1962 he had been convinced that, “It is now plain that nobody can perform the miracle of malaria eradication in Africa simply by saying ‘Let us spray!’”. [2]

Bruce-Chwatt remained an expert commentator on all aspects of the disease, and on malaria policy, right up to his death in 1989. His own published and unpublished writings and the various papers by others which are also included in the collection cover many different aspects of the issue including epidemiology, parasitology, insecticides, antimalarial drugs and drug resistance.

Despite the apparent pessimism of his comments as quoted above, Bruce-Chwatt did, in fact, remain guardedly optimistic about the future, placing his faith in a combination of scientific progress and the efforts of international agencies. We can only wonder whether he would have felt this optimism justified by today’s global programmes such as Roll Back Malaria, the Malaria Vaccine Initiative and the Multilateral Initiative on Malaria, the Wellcome Trust’s continued heavy investment in malaria research, the sequencing of the malaria parasite genome and rising hopes for an effective vaccine.

Images:
– A spraying team at work as part of a malaria control programme in Sokoto, Northern Nigeria. Note from left to right the stages of preparing insecticidal supsension before spraying operations: the drum with the DDT powder, the pouring of the prepared suspension into the container through the sieve, and the compression sprayer. Mid 20th century (Wellcome Images, W0004205)
– Jan Leonard Bruce-Chwatt (Wellcome Library no. 14530i)