“I went down to the St. James Infirmary
I saw my baby there,
She’s laid out on a cold white table,
So so cold, so white, so fair”

So runs the chorus of St James Infirmary: a Blues standard which has been interpreted by everyone from Louis Armstrong and Josh White to The White Stripes and Hugh Laurie.  As the lines above indicate, the song’s narrator tells of a man who goes to a hospital and sees his girlfriend lying dead, the sight of which leads him to ponder his own mortality.

I’ve never given much thought as to whether the titular Infirmary was a real hospital and if so, where it actually was.  If pushed – given the song’s place in the Blues tradition – I’d probably plump for New Orleans or Memphis: certainly somewhere in the south of the United States.

I thought of the song in a whole new light after watching London Calling: a new BBC documentary exploring the history of London through its songs.  During the programme, presenter Jools Holland discusses St James Infirmary with folk singer Eliza Carthy and discovers that the song not only has its origins on this side of the Atlantic but also that its medical connections are rather intriguing (if not down right complicated…).

Carthy tells Holland that St James Infirmary is based on an old English ballad: that the ‘St James’ referred to is actually the St James’s area of Central London and that the hospital in question was was located on the site where St James’s Palace now stands.

Carthy’s account of the song’s history is born out by The Unfortunate Rake, an album released in 1960 on the Folkways label. The album contains 20 different versions of the song and tries to trace its progression from an English ballad to an American Blues.  The liner notes spell these change out: the ballad, The Unfortunate Rake, is about a man dying rather than a woman.  Also its not clear if this man – the ‘Unfortunate Rake’ of the title – is actually a patient in the hospital or not: in the first version of The Unfortunate Rake on the 1960 album, the narrator is walking “a-down by St James Hospital” when he sees “one of my comrades“.  The ‘unfortunate rake’ – is wrappped in flannel (“though warm was the day”) and tells the narrator that his plight is all the fault of “a handsome young woman” and that: 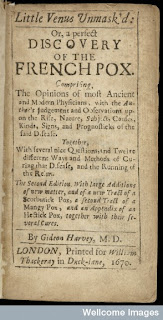 As many works in the Wellcome Library (including Gideon Harvey’s Little Venus Unmask’d) would attest, our unfortunate rake, has contracted a venereal disease – most likely syphilis (or the “french pox” as referred to here).  Even with the remedies suggested in books such as this – and the fact that the pox was only fatal after many years – our rake is after all an unfortunate one and he spends the remainder of the song planning his funeral…

As the liner notes to the Folkways album indicate, the presence of venereal disease disappears as the song travels, mutates and develops into the Blues song we know as St James Infirmary.  The presence of disease is removed but the pondering of death and mortality remains.

But there’s also questions over the ‘original’ St James Hospital: as the Folkways notes attest, the hospital in St James being referred to was actually a hospital for people suffering not from syphilis but from leprosy – and specifically female lepers.  From the original sources we know that this leper hospital was established in the 13th century and fell into disrepair before the lands were purchased by Henry VIII to build his palace in 1532.  But was this really the hospital that inspired the song?  And if so, what a was a man doing outside the hospital?  Is there perhaps an even older form of the ballad, lost to history, that might explain this? Given the theme of The Unfortunate Rake its interesting to note that a historian of London’s medieval hospitals has commented that with regards to the leper hospital of St James: “Visitation records refer repeatedly to violent quarrels, unseemly noise, swearing, drunkenness, and sexual incontinence on the part of the brethren” [1]
So, we’ve traced an American Blues song about a woman dying in St James’s Infirmary, to an English Folk ballad about a man dying of syphilis, seemingly outside a leper hospital for women in London.  The location and context may have changed, but the one constant through the song’s alteration is the fear of disease and death.  Timeless concerns, and ones that help explain the song’s longevity, but not alas, the ‘real’ St James Infirmary.
[1] Carole Rawcliffe ‘The Hospitals of Later Medieval London’, Medical History 28 (1984) 1-21