Easing the way for literature 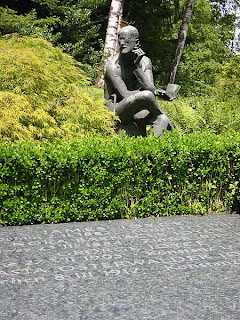 16th June 1904: a young Dubliner goes on a first date with the woman who will become the mother of his children and (much later) his wife. Eighteen years later – that is, in 1922, ninety years ago – he will publish a book that, as well as encapsulating all literature, will capture Dublin as it was on the day of that first date, so that, as he was to say, if Dublin were destroyed it could be rebuilt from the information in that one volume. The young man is James Joyce, his date Nora Barnacle and the book Ulysses. Bloomsday, as 16th June is known to Joyce enthusiasts, is celebrated every year, but readers in Britain will be aware of extra coverage this year, as the BBC marks 90 years since the book’s publication with various events culminating in a dramatization of Ulysses spread across Radio 4 throughout Bloomsday, whilst in Ireland RTÉ’s arts programme The Works will be devoted to Joyce.

A character resembling Joyce does feature strongly in the book – the rather humourless, priggish Stephen Dedalus, whom readers first met on a journey from childhood to young manhood in A Portrait of the Artist as a Young Man – but a quite different figure is at the centre of Ulysses, the middle-aged Jewish everyman Leopold Bloom. From the moment that he appears, at the start of the fourth chapter, Bloom is never far from the book’s action and it is his interior monologue that features most strongly as he navigates the city: hence, of course, the name Bloomsday.

Ulysses exists on multiple levels – as high conceptual art and meta-fiction, a discourse about literature via literature, picking up, pastiching and parodying various forms and tropes; but also on a more down-to-earth level as an experiment in rendering experience via language as completely as possible. This for Joyce means a focus upon the detail of basic, quotidian experience, observed closely and rendered faithfully and without judgement. Moments after Bloom’s first appearance, the brilliant ear Joyce brought to this project is summed up in one line from Bloom’s cat –

The cat walked stiffly round a leg of the table with tail on high.
-Mkgnao!

– which captures perfectly a particular sound to the extent that it is hard, having read it, not to hear all cats in future as saying “Mkgnao!” rather than the conventional Miaow. The focus on the quotidian however, also leads Joyce with some relish into areas often considered offensive or taboo. On the very first page Stephen Dedalus’s friend Buck Mulligan borrows Dedalus’s handkerchief and goes into flights of verbal fancy over the colour “snotgreen” – gazing out over Dublin Bay, he embarks on a verbal riff about “The snotgreen sea. The scrotumtightening sea.” Joyce’s characters, unlike many in literature, have bodily fluids and bodily waste: snot, urine, menstrual blood, farts, semen and excrement are all produced by one or other of them in the course of the eighteen hours tracked by the novel.

Human beings as part of the physical world, of course, are the stock in trade of the Wellcome Library, with Sir Henry Wellcome’s collecting vision of the history of medicine being (inter alia) a history of humankind’s physical side. It is, therefore, particularly appropriate that Wellcome, or rather one of his products, has a walk-on part at precisely one of those moments in the book. Bloom first appears early in the morning, frying breakfast and making tea (some of the meat is begged by the cat we met earlier, whilst a cup of tea is taken to his half-asleep wife). Like many of us, we suspect (but we won’t pry), he finds that after a short while up and about, his bowels kick into action and he has to go off to the privy at the end of the garden, where he muses on defecation during the act and provides a little endorsement for a Wellcome product:

..his last resistance yielding, he allowed his bowels to ease themselves quietly as he read, reading still patiently, that slight constipation of yesterday quite gone. Hope it’s not too big bring on piles again. No, just right. So. Ah! Costive one tabloid of cascara sagrada.

Cascara sagrada was a widely used natural laxative, derived from the dried bark of a species of Buckthorn – a routine element in the materia medica of the time. “Tabloid”, however, makes the mention more specific: this was (and is) a Wellcome trademarked word and at this time Wellcome was assertively litigious in defending his intellectual property, so there is no question that when Joyce has Bloom think of a product delivered in “tabloids” it is a Burroughs Wellcome item. (An image of Burroughs Wellcome Cascara Sagrada can be found in the Science Museum’s Science and Society picture library.) Wellcome rarely missed a trick when it came to publicity and was keen to make sure his products were prominently placed in, for example, accounts of polar exploration. We suspect, however, that he was unaware of this bit of product placement in a notoriously “dirty” and long-banned book, and if he had known he might well have been rather too prudish to enjoy it.

It is a quirk of Joyce’s works, perhaps a function of the years each took to write, that by the end of each they tend to be turning into the next. A Portrait of the Artist as a Young Man brings Stephen Dedalus from infancy to the priggish young man who appears on the first page of Ulysses, whilst as the latter progresses its balance shifts from intense focus on everyday experience and interior monologue towards a more purely literary nature, working through various literary genres and parodies in an “unrealistic”, meta-fictional mode. This foreshadows Finnegans Wake and its attempt to bundle all of human experience and all human language into a tale of one archetypal family told in “night-language”, the slurred language of dreams in which concepts collide and coalesce in an endless series of puns, some serious and some joyfully smutty. We cannot, alas, say whether Wellcome or his products appear in the Wake, although its professed aim of encompassing all human experience means that they might well be in there somewhere. Perhaps Joyce missed a trick: in the first pages of Finnegans Wake we find ourselves inside the Wellington Monument in Phoenix Park, enlarged and transformed into a museum – “Now yiz are in the Willingdone Museyroom” – and he would surely have loved to include the Wellcome Museyroom, and to use the founder’s name as the opportunity for a smutty double entendre. Wellcome’s tense relationship with his more easy-going partner Silas Burroughs, too, is reminiscent of the Wake’s “Tales Told of Shem and Shaun”, the stories of personality clash between two contrasting brothers (based on Joyce and his more strait-laced brother Stanislas) that include the fable of the Ondt and the Gracehoper. The beauty of Finnegans Wake is that, containing multitudes, it lends itself to application in all sorts of ways: if Wellcome, or indeed anyone one wishes, does not appear in it explicitly one can still find some sort of analogue. Another of its beauties is that having mentioned it one is immediately absolved from bringing a blog post to any sort of conclusion; like Finnegans Wake itself, one can start anywhere and just end in mid-

Illustration: James Joyce’s grave in Fluntern Cemetery, Zürich. Copyright, Lars Haefner, made available under Creative Commons Attribution-Share Alike 3.0 Unported license via Wikimedia Commons. Fluntern Cemetery is high on the rounded top of the Zürichberg and backs onto Zürich Zoo: when she buried her husband there Nora Joyce commented that he would be able to hear the lions roaring and would like that.