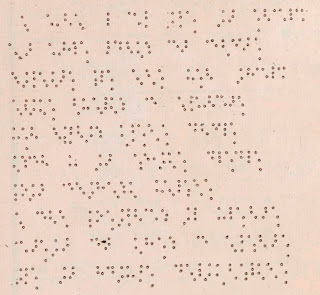 At first glance, this image might look familiar. It’s a coded text that uses raised dots to be read by the fingertips. But one group of people who won’t find the code easy to understand are readers of Braille. That’s because this text isn’t written in Braille, but in a precursor to Braille devised by Charles Barbier, known as night-writing.

Nicholas Marie Charles Barbier de la Serre (1767-1841) was a captain in the Napoleonic army, who became obsessed with ways to improve communication with his troops and in particular with relaying orders in the dark without alerting the enemy. Barbier’s solution was a kind of phonetic code – he split the French language into 36 sounds which he laid out in a grid of numbered rows and columns. Though various methods, Barbier suggested, these grid positions could be communicated, and the sounds understood. One of these methods used the hands, rather like sign language – a number of fingers on the light hand were touched to a number on the left hand, representing the number of rows and columns on the grid. In another variation the code was cut into a piece of paper with a pocket knife; in yet another dots were impressed into the paper using a blunted stylus – the first line of dots represented rows, the second columns.

Barbier was confident that his invention was a good one – he just didn’t know what it could be used for. Rough-handed soldiers found it hard to read the impressions with their fingertips and the system was dismissed by the army as impractical and difficult to learn. Undeterred, Barbier considered various other uses. In a series of self-published pamphlets, of which Petite typographie privée d’ambulance is one, he proposed uses ranging from teaching the illiterate to read and write, to surreptitious note-taking, to creating multiple copies of the same article. 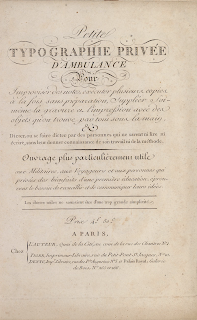 Finally Barbier realised that a system that had been designed to be used in the dark could be equally useful to the blind. In 1821 he presented his method to the blind children at the Institution Nationale des Jeunes Aveugle for testing. It was by no means the first type of embossed text the pupils had encountered – the founder of the school, Valentin Haüy, had produced tactile books for the blind since 1786. However, Haüy’s alphabetic script was not at all suited to reading by touch – rounded letters are easily distinguished from another by sight, but with the fingers they are slow to read, even with two hands. Barbier’s invention was received enthusiastically by the testers, but there were problems – the system was phonetic, so no good for boys who needed to master spelling and grammar to prepare them for work. Worse, there was no punctuation, meaning that the sounds ran into one another and became jumbled.

In the end it was a pupil at the school who made the adaptions necessary to put the code to use. Louis Braille heard the presentation when he was just 12 years old. His improvements – adapting the code from a phonetic to an alphabetic one and using 6 dots rather than 12 – meant that it could be read quickly with the fingers of just one hand. It was these changes that made the system practical and fast enough to give blind pupils a taste of the independence they craved. In 1837 Braille published his modified code, and in 1854, it was officially adopted in all French schools.

By all accounts a stubborn and condescending man, Barbier continued to proclaim his écriture nocturne to be the superior system, even as it was eclipsed by the success of Braille’s. Nevertheless, Braille acknowledged Barbier’s contribution in the second edition of his work, praising the ‘ingenious’ invention that had allowed him to construct his system of communication for the blind.