Dr Hannah Newton is a Wellcome Trust Fellow at the University of Cambridge. Here, she provides insights into the treatment and experience of childhood illness in the early modern period, and overturns three enduring myths about the history of childhood. 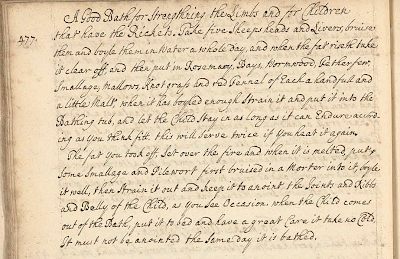 In the late-seventeenth century, the London gentlewoman, Katherine Jones, described how to make ‘A Good Bath…for Children that have the Rickets’. She instructed, ‘Take five sheeps heads and livers, bruise them and boyle them in water a whole day’. Next, add a handful of ‘Rosemary, Bays, Wormwood, Fatherfew, Smallage, Mallows, knotgrass and red fennel’. When these were ‘boyled enough…put it into the Bathing tub, and let the child stay in as long as it can Endure according as you think fit’. She warned, ‘When the child comes out of the Bath, put it to bed and have a great care it take no cold’.

I encountered this recipe whilst leafing through the fragile pages of Katherine Jones’ collection of culinary and medicinal recipes, now housed in the Wellcome Library, and available for digital download from the website. It sparked a series of questions in my mind. How might Katherine’s child have felt about taking a bath bobbing with the heads of dead sheep? Were children’s medicines the same as those of adults? How did young patients respond emotionally to illness and the prospect of death? What role did mothers and fathers play in the care of ill children? These questions are addressed in my new book, The Sick Child in Early Modern England, 1580-1720. At this time, the illness or death of a child was common – almost a third of the young died before reaching the age of fifteen – and yet historians have rarely touched upon this subject. Taking the perspectives of doctors, parents, and children themselves, my book investigates the perception, treatment, and experience of childhood illness in England between approximately 1580 and 1720. It exposes three myths in the history of early modern childhood, outlined below. 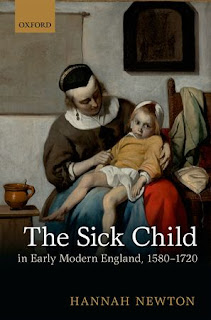 According to popular legend, there was no concept of ‘childhood’ in medieval or early modern societies. In old paintings, children resemble little adults, dressed in the style of their elders. This view, which has largely fallen out of favour amongst historians, has seeped into the history of medicine – it is assumed that before the late nineteenth century, children and adults were treated using identical medicines. However, an examination of medical texts, recipe collections, and doctors’ casebooks, sheds doubt on this notion. The medical author ‘J.S’, declared in 1664, ‘children are to be cur’d in a different manner in them then they are in other Ages’. Their bodies resembled ‘soft wax’ – they were weak, warm, and full of moisture. This unique physiology meant that ‘a special regard is to be had to the Methods and Medicines, for Children by reason of the weakness of their bodies, cannot undergo severe methods or strong Medicines’. Instead of using the usual remedies of the time – vomits, purges, and bloodletting – children were to be treated with milder medicines, such as topical ointments and baths, and non-evacuating internal medicines. Of the 482 medicines for children that were listed in the collections of manuscript culinary and medical recipes that I analysed in the Wellcome Library and British Library, less than 4 percent were for emetics and bloodletting, and only about 15 percent were for purges and enemas. Evacuative treatments were to be avoided because they were ‘unpleasing, ful of pain and molestation to Children’, stated the physician Francis Glisson in 1651. Of course, there were occasions when these treatments were used – older children were more likely to be given vomits and purges than infants, and when the child was gravely ill, practitioners were sometimes prepared to risk administering a more aggressive remedy on the grounds that it might save the child’s life. But on the whole, gentler treatments were preferred.

As well as giving children different treatments, doctors and laypeople thought it was necessary to ‘limit…the strength, quality and quantity of the medicine’ by adapting the treatments in various ways. Doses were lessened for children, and the more powerful ingredients were often omitted. Mary Poppins’ technique of ‘adding a spoonful of sugar’, was another common practice. Francis Glisson noted that he sought to make the medicine ‘grateful & pleasing to the sick Child, & such as trouble not its Pallate’. The recipe book of Anne Glyd suggests that a medicine for ‘chin cough’ should be put into ‘hon[e]y’ or ‘what ever the child likes best’. Doctors knew that ‘children will not take bitter things’, and therefore either left these ingredients out, or disguised them by putting them into the child’s normal food or drink. To persuade children to submit to treatment, bribery was sometimes used. John Yorke complained that his nephew James ‘is…so refractory [about] taking what is proper for him’, that ‘[it is] a hard taske to govern him’. Yorke had to ‘use all my perwasion’ to get the child ‘to take what the Dr order’d’. Eventually through promising him a copy of Robinson Crusoe, the child agreed to take the medicine.

Myth 2: Parents did not love their children in the past.

It is often suggested that high rates of death in the early modern period discouraged parents from investing too much affection in their children. Fathers in particular, have been depicted as unemotional, aloof figures at this time, who spent little time with their children, and rarely showed much grief at their deaths. Contemporary diaries and letters provide a very different picture. During illness, fathers and mothers tended their children with devoted care. In 1679, the Anglican clergyman Isaac Archer recorded that he ‘sate by’ his six-year-old daughter Frances with his arm around her, and ‘helpt it all night’, offering her words of comfort. Witnessing one’s child suffer pain, grow weak and pale, and eventually die, provoked the most painful passions imaginable in parents. In 1647, the Yorkshire gentleman Ralph Verney nursed his eight-year-old daughter Pegg, who was suffering from a cancerous ulcer. He told his uncle, Dr Denton, ‘Poore childe you doe not know what miserie she hath endured’: she was so weak she ‘she cannot turne her selfe in her Bed’. He concluded his letter, ‘oh Dr I am so full of affliction that I can say noe more but pray for us’. When death finally arrived, the grief of parents was often so intense that they found it difficult to express. When Ralph Verney’s wife Mary found out that Pegg had died, she told him, ‘I am nott able to say one word more but that at this time there is nott a sadder creature in the world than thine own Deare M’. It appears that both mothers and fathers loved their children with the same intensity that we expect from parents today.

Myth 3: It is impossible to access the child’s experience.

It is notoriously difficult to investigate the experience of childhood in the seventeenth century. Children rarely left written records. However, there is one context in which their voices do survive: illness. Acutely aware of the likelihood of death, parents recorded the thoughts, words, and actions of their sick children in detail. The resulting evidence provides rare and intimate insights into the lives and deaths of early modern children. At eight o’clock one October evening in 1625 when Grace Wallington was washing the dishes, her three-year-old daughter Elizabeth asked her, ‘What doe you heere?’ Later that night when she was in bed, she said to her father Nehemiah, ‘Father I goe abroode tomorrow and bye [buy] you a plomee pie’. The reason these everyday sentences were recorded by Elizabeth’s father was that, ‘These were the last words that I did heere my sweete child speeke’, for the next day, she died. Some forty years later, John Vernon recalled the words of his dying son, twelve-year-old Caleb: he had spoken of his pet bird, saying ‘I will give it to my Sister Betty, who hath none, for Nancy [another sister] hath one already’. 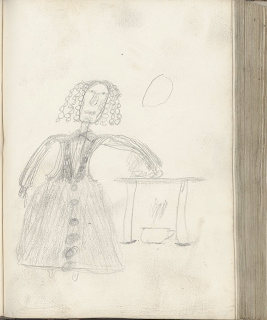 Although these accounts may have been edited and censored by their parents, they do nonetheless shed light on children’s preoccupations. Children’s words also reveal their feelings for their parents. In the 1670s, six-year-old Jason Whitrow took his mother ‘by the hand, and said, Mother, I shall dye, oh that you might dye with me, that we might both go to the Lord together’. Daughters’ feelings for their fathers could be similarly deep. Thomas Camm described how his eight-year-old daughter Sarah lay in his arms during her illness in 1682, and told him ‘Oh! my dear Father, thou hast been very tender and carefull over me, and hast taken great pains with me in my Sickness…we shall meet in Heaven’. Christian beliefs about heaven were a source of unquantifiable comfort to all family members. While children rarely left written records, some sources do survive. When I was reading a recipe book in the Wellcome Library, I came across something very exciting: a child’s picture. It shows a woman cooking, perhaps boiling herbs for a medicine. Virtually indistinguishable from a modern child’s drawing, it brings the past to life.

2 comments on Bathing with Sheeps’ Heads: The Sick Child in Early Modern England