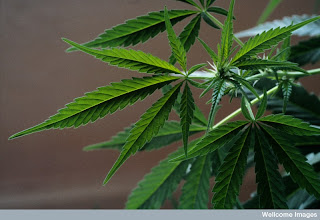 Papers held in the Wellcome Library relating to the work of the UK branch of Alliance for Cannabis Therapeutics (ACT) have now been catalogued and are available for research. They can be ordered online through the Wellcome Library’s catalogue (ref SA/ACT). The main bulk of the papers contain the day-to-day administrative files of the group, including correspondence, press cuttings and material relating to delegations to the Houses of Parliament.

The UK branch of ACT was set up in 1992 by Elizabeth Clare Brice [1]. The group strove to campaign for the legalisation of cannabis in the UK to alleviate the symptoms associated with Multiple Sclerosis.

Brice, a medical journalist, was diagnosed with Multiple Sclerosis in 1983. In 1992, after reading an American medical report, she started using cannabis to help her condition. In that year, with two other patients, she set up ACT, an informal association of patients, doctors and politicians, with the support of the American organisation of the same name.

ACT initiated the debate about medical use of cannabis in the UK, keeping the discussion alive, through interviews and articles for the press. ACT exerted pressure politically and took two delegations to the Department of Health and Home Office. On the second delegation in 1997, ACT asked ministers if the British pharmaceutical entrepreneur Geoffrey Guy could be given a licence to cultivate cannabis for research. In 1998 Guy founded the company G.W. Pharmaceuticals to produce and market medically useful extracts from the cannabis plant.

In 1997 ACT was involved in the British Medical Association’s report ‘The Therapeutic Uses of Cannabis’. Brice was interviewed by a House of Lords Select Committee in 1998 on the subject and also later appeared as an expert witness in a trial about the illegal use of medical cannabis. [2]

Brice donated her papers to the Wellcome Library in 2010. Sadly, she died in August 2011. She is survived by her husband Duncan Dallas, founder of Café Scientifique, and her two sons.

The ACT papers are available to registered Wellcome Library readers after the completion of an Archives and Manuscripts readers’ undertaking. Some files have been restricted and closed under the Data Protection Act.

The papers interlink with two other recently catalogued collections of archival material on the medicinal use of illegal drugs: the papers of psychiatrist Ronald Sandison and of MP Brian Iddon.

[1] Elizabeth Brice campaigned under the pseudonym Clare Hodges, to protect her family

[2] Elizabeth Brice participated in a Wellcome Witness seminar on ‘The Medicalisation of Cannabis’ in Spring 2009: a downloadable pdf and material relating to the seminar is also available in the Wellcome Library’s archive and manuscript collections (catalogued as GC/253/A/40).