Papers held in the Wellcome Library relating to the life and medical career of Bonté Elgood (née Amos) (1870-1960) have now been catalogued and are available for research. They can be ordered online through the Wellcome Library’s catalogue (ref PP/ELG). The papers relate to Bonté’s remarkable medical career that took place largely in Egypt where she practicised from 1902 until she was forced to leave during the Suez crisis of 1956. 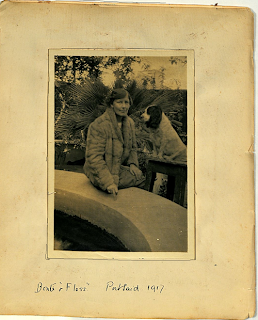 Bonté was the daughter of Sheldon Amos (1835–1886), an academic lawyer and British judge in the Egyptian High Court and Sarah Maclardie Amos (1840/41–1908) a political activist. Bonté and her brother Maurice, who went on to become Sir Maurice Amos (1872–1940) a Judicial Advisor to the Egyptian Government, were born in London but had an unusual childhood and education. In 1880 she and Maurice went with their parents to Australia for their father’s health. Finding the country uncongenial, they set out to return to England. However, when they reached Egypt, Sheldon Amos was invited by Lord Dufferin, British adviser to the Porte, to be his legal adviser, and they remained in the country.

Bonté returned to England at the turn of the century and did her clinical studies at the London School for Medicine for Women at the Royal Free Hospital, and was taught by Elizabeth Garrett Anderson (whose daughter Louisa was a friend and fellow-student) where she qualified in 1900. Returning to Cairo in 1901 she set up in private practice and also worked at Port Said as medical officer to the Quarantine Board of Egypt responsible for the health of pilgrims from Mecca. Fluent in Arabic, she was the first woman to be appointed for service by the Egyptian Government. She worked here for two years in the Quarantine hospitals at El-Tor where she observed many infectious diseases, including dysentry on which she wrote several papers. She married a soldier, Percival Elgood, in 1907 then director of the Police School in Cairo and later Controller at the Ministry of Finance. They lived in Heliopolis until his death in 1941.

In 1911 she founded a training school for Egyptian midwives and went on to develop a scheme to send Egyptian women for medical training in London. What began as administration of three schools with 600 female pupils grew to 106 schools with 20,000 students by 1923. The training school later developed into a hospital with a school for nurses as well as midwives attached to it and she was an active member of the board until she left the country in 1956. Her departure from Egypt was prompted by the Suez crisis – all British nationals were made to leave Egypt and following ten days in detention Bonté escaped with just a suitcase (her diary speaks of her sadness as she had to leave her beloved cat behind). After spending some time with friends in Cyprus she returned to London where she died in Chelsea aged 86 in 1960.

Bonté was awarded the OBE and the CBE, the Order of the Nile Third Class of which she was first woman ever to earn an honour for public service by an official Egyptian agency. She received the Médaille de la Reconnaissance Francaise 3me Class for her services to Allied troops in Cairo and throughout Europe. She also received a silver medal from the Union des Femmes de France, and a Red Cross Medal for distinguished war service in 1946.
The papers were donated to the library by Elgood’s great-niece Ruth Hawthorn in 2011. Largely a collection of personal papers, they are rich in the detail of colonial life in Egypt.

Elgood’s papers are available to registered Wellcome Library readers after the completion of an Archives and Manuscripts readers’ undertaking. Some items are currently undergoing conservation and are unavailable. Readers should consult the online catalogue for more information.

A collection of related interest is the archive of Lilias Hamilton (ref PP/HAM), a pioneering woman physician who worked in Afganistan. Readers may also find the Wellcome Library’s Women in Medicine Sources Guide useful.