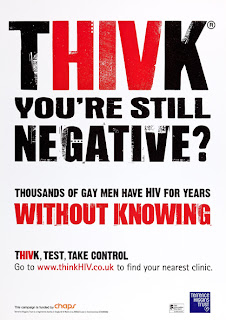 It is not only Independence Day in the US today. It is also the 30th anniversary since the death of Terry Higgins, the first person publicly identified as dying with AIDS in the UK on 4th July 1982.

To prevent more people facing the same fate, a group of Higgins’ friends established a Trust in his name on 26th November that year to raise awareness of the disease. The Trust remains at the forefront of the fight against HIV in the UK today.

The Trust have recently donated examples of their recent publicity campaigns to the Wellcome Library.  Among the campaigns are posters targeting Black Africans (see http://www.mambo.org.uk/ for details): 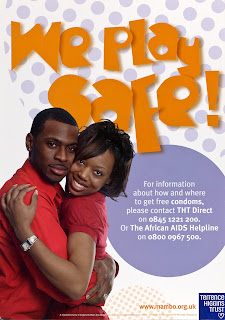 Another draws attention to ‘PEP’, or post-exposure prophylaxis, a treatment that can stop HIV infection after the virus has entered the body. Such a treatment is not intended as a substitute for condoms as this poster warns: 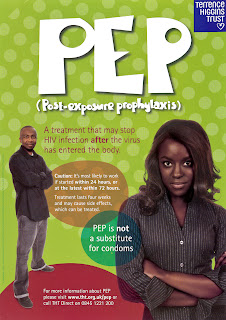 Other quick tests now on offer are also publicised by the Trust: 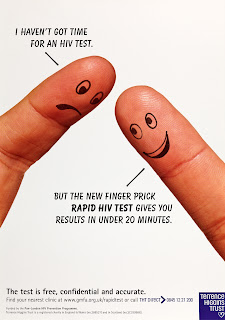 These posters and ephemera items will contribute to the already extensive collection of AIDS posters from across the world held within the Wellcome Library. This collection has been highlighted in numerous other posts see: 3000 AIDS posters catalogued, World AIDS Day: from despair to defence, BBC Audio slide show: The AIDS message, Spreading the word: HIV/AIDS at 30. Of the 99 posters from the UK already in the collection, 29 of those were produced by the Terrence Higgins Trust, some in collaboration with other smaller groups such as London Black Mesmac from the early 1990’s – see 666560i. As with two-thirds of the collection, the Terrence Higgins Trust also focussed heavily on safe sex and use of condoms as this poster demonstrates on the right from 1992 (666545i):

The advantages of recently digitising the entire collection has enabled us to convert the records into a World map:

This map clearly shows the global spread of the disease though it must be stressed, the collection is by no means complete.  Large gaps across Asia, Africa, and the perimeters of North America are not always because of collection omissions. In some cases, sparsely populated areas are to blame, but also the fact that some regions just didn’t respond to the disease.

Since 2001, HIV prevalence in Russia, Eastern Europe and Central Asia has increased by 250 percent, making the region home to the world’s most rapidly expanding epidemic. In contrast, over the same period, prevalence in sub-Saharan Africa fell and stabilised in South and Southeast Asia where campaigns have continued.

Click here  for the latest HIV statistics in the UK. To find out more about how the Terrence Higgins Trust are marking their anniversary, see their current press releases.  Please note the posters illustrated have yet to be catalogued. 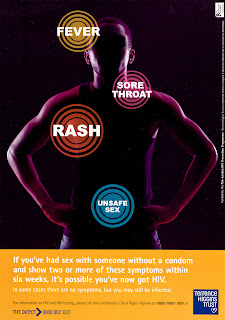