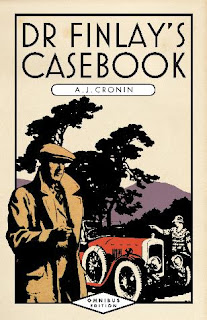 Who is the most famous fictional doctor in the world? Birlinn Press would have you believe the answer is Dr Finlay: the creation of the Scottish author A J Cronin, whose Finlay stories they have recently republished (the Birlinn claim is made on the blurb on the back of the book).

Whether right or wrong, today is an appropriate day to ponder the question, as it’s the 50th anniversary of the first broadcast of the BBC series, based on Cronin’s stories.

The background to the series can be traced in two titles recently added to the Wellcome Library’s shelves, the aforesaid Birlinn title and also a new biography of Cronin (subtitled ‘The man who created Dr Finlay’), tracing his career from his Scots childhood, through his truncated career in medicine, to becoming one of the most popular authors of the 1930s and 1940s.

The fame of Cronin’s creation mainly rests on the BBC series: Dr Finlay’s Casebook ran for eight series, with the last episode being aired in 1971 [1]. Set in inter-war Scotland, in the fictional rural community of Tannochbrae, the series followed the exploits of the youthful and idealistic Dr Finlay, the curmudgeonly Dr Cameron (Finlay’s senior partner in their practice), and Janet, their ever-reliable housekeeper.  The series’ safe and reassuring outlook on life greatly influenced later TV medical dramas, from All Creatures Great and Small to Doc Martin.

Whether it’s the scenic settings or the combination of old and young doctors disagreeing over modern methods of treatment, many a TV doctor has followed in the footsteps of Finlay and Cameron’s house calls.  Add to the equation Finlay’s combination of epidemiological sleuthing and native cunning, and you have a doctoring formula that even someone as different in personality as Gregory House appears to follow.  All these attributes are present and correct in this clip from a 1965 episode, where Dr Finlay investigates a seemingly poisonous well…

The BBC series quickly outgrew Cronin’s original stories. The new biography reveals Cronin almost pulled the plug on the series in 1964, when new stories were suggested by the show’s script-writers. He relented, and the series grew in stature, becoming a familar part of the BBC’s output, settling into a slot on the Sunday evening schedule. This praise from the broadcast critic of The Times captures something of the series’ popularity: “My regard for Dr Finlay’s Casebook is unqualified. Here is a native home-made mythology of Britain instead of that imported Wild West folk-lore which still dominates our screens” [2].

Whilst seemingly examplars of traditional values, Cronin’s stories did have a radical edge.  His novel of 1937 The Citadel had an enormous impact (some would say even helped create the climate in which the National Health Service was created) and has been praised as a prime depiction of ‘social doctoring’, a description, though, that also fits for the character of Dr Finlay: “…the true heroics are not the ambitious and the famous, but the doctor who is socially responsible to patients and wary of therapeutic ambitions that cannot be realized”. [3]

Whilst preserved in a pre-NHS, rural idyll Dr Finlay is probably not the “most famous fictional doctor” claimed by Birlinn Press, but – particularly in his TV incarnation – he is one of the most popular and influential representations of a doctor in post-war British culture.

To mark the 50th anniversary of Doctor Finlay’s Casebook, BBC Alba are repeating episodes of the original series over the forthcoming weeks, beginning this evening.  Viewers in the UK can catch up through the BBC iPlayer.