For many in this country, the end of August traditionally marks the end of the summer holidays, as children return to school and parents return to the workplace. During the late 1970s and 1980s, as many Brits returned from holidays increasingly spent on the continent and entered through customs controls, there were brought with a jolt back out of their holiday reveries by posters, starkly warning against the threat of a potentially fatal disease. 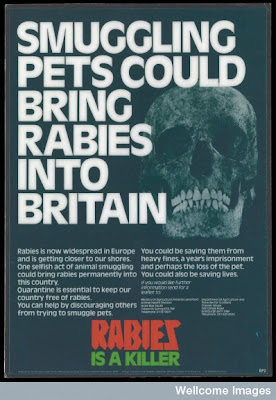 Produced by the UK Government, such posters – copies of which are held in the Wellcome Library [1]- were produced during a period which saw fears of a rabies outbreak in this country reach fever pitch.  Through a variety of preventative measures, following on from Louis Pasteur’s discovery of a vaccine for human cases of rabies, the disease had been eradicated in Britain in the late 19th century.  However, fears of the disease grew again in the late 1960s, when a strain of the virus carried by foxes, moved west from Poland and into most of continental Europe. 1974 saw the passing of a new rabies act in the UK, extending quarantine periods and increasing deterrents against animal smuggling. 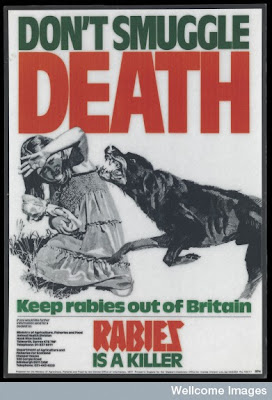 As the historians Neil Pemberton and Michael Worboys examine in Mad Dogs and Englishmen: Rabies in Britain, 1830-2000 (Palgrave, 2007), attitudes to rabies in this country were intertwined with wider social and cultural conceptions, particularly regarding Britain and its relationship with continental Europe. Frequently, it was perceived in the 1970s and 1980s that the innocent island nation of the UK was under threat from a disease emanating from the continent: only the enduring British values of diligence and watchfulness could protect these shores from the evils of rabies. 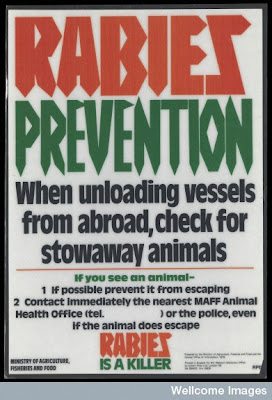 Whilst this poster acts as a warning to customs officials to check the contents of vessels for stowaway animals, fears of the spread of rabies also played upon the traditional stereotype of the British as a nation of animal lovers, as this Public Information Film from 1982 made clear:

Fears of a rabies outbreak in this country receded in the 1990s, but representations of the disease still have a cultural resonance for many people who grew up in 1970s Britain.  Whether its through the chills that the posters and public information films still induce or – as Pemberton and Worboys have noted – through memories of sensational novels and TV series of the 1970s and 1980s (such as The Mad Death), directly inspired by fears of a rabies outbreak.  It can even be argued that recent British horror films – such as 28 Days Later – which play with notions of the breakdown of British society following a mass outbreak of a virus passed from animals to humans, owe something to fears of rabies as expressed in the 1970s and 1980s. 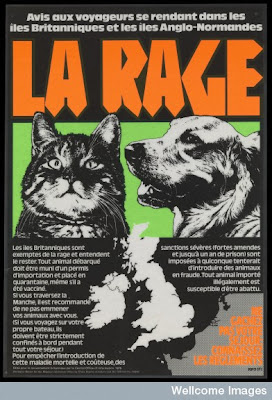