Carlos Paton Blacker or ‘Pip’ as he was more commonly known by his closer contacts, was a psychiatrist and eugenicist who played a crucial role in family planning in Britain during the 20th century. His archive, which is in the process of being digitised, also provides an insight into the role of a medical officer of health during the second world war.

A decorated war hero, Blacker worked for the Coldstream Guards.  His papers from this period throw light not only on common complaints suffered by servicemen, but also on his personal experience of the war.

As well as the mental and physical wellbeing of his men, it appears Blacker played a part in their social welfare. A prize-winning middle-weight boxer at Oxford in the 1920’s, Blacker ran boxing, milling and water cart competitions for his troops. The latter involved racing the vessels in which drinking water for the men’s bottles was contained – proper maintenance of these containers was crucial to prevent water-borne infections. Injuries from such competitions were inevitable causing, on one occasion ‘ten casualties (mostly sprained thumbs)’ (Blacker to Fowler, 17th April 1941, PP/CPB/E/1).

The role of a medical officer was clearly hectic. Regular medical inspections of his battalion, who were spread far and wide, were performed daily. In addition, Blacker was also required to attend lectures on topical medical issues – he was hard pressed to attend them sometimes, as this memo implies from 4th May 1941 (PP/CPB/E/1):

‘It is most exceedingly inconvenient for me to absent myself from the Bn. in the mornings, because I see sick in five villages, including some attached troops’

Overcrowding and poor ventilation of billet units which increased the risk of droplet-borne infections was one of many issues that Blacker drew attention to in his correspondence: a memo from a Camp Commandant in Kilmarnock, 29th October 1941, refers to ‘2 reported cases of cerebro spinal meningitis in the quarters’ as a result of such conditions (PP/CPB/E/1). In response, Blacker recommended that ‘full use be made of all available floor’ and the ‘removal of partitions which obstructed ventilation’.

Skin conditions were also a problem, a consequence of lice-infested clothing and bedding. On 14th Aug 1940, Blacker wrote (PP/CPB/E/2/1):

every man in the unit should be ordered to spend ten minutes a week carefully examining his shirt, his pants and the seams of his tunic and trousers for pediculi and their eggs

To solve this problem, he ordered a ‘Serbian barrel disinfestor’ – this involved placing clothes in a galvanised garbage can or similar with wire mesh in the bottom and sterilising them with steam from boiling water underneath for forty five minutes, a method apparently applied by US troops at Auschwitz and first used in the 1915 Serbian typhus epidemic. If it wasn’t lice, it was teeth that were quite literally a pain according to the amount of correspondence between the battalion dentist (French) and Blacker. Many troops would beg particularly for a dental check-up before going on campaign where they would most likely receive no treatment for months on end (letter dated 3rd February 1941, PP/CPB/E/1):

‘There are several men in the Bn. Who have been without dentures since before the invasion of the low countries. Some of these had impressions taken in France; but all these were lost’

To alleviate the pain of such conditions, aspirin was often the only answer:’We need as many as 500 aspirins … I am very fully aware of the need for economy, but one has to treat sick men with something and aspirin, which is made synthetically from by-products of the coal industry, is about the cheapest thing one can use.’ (letter to C.Q.M.S. 27th January 1941, PP/CPB/E/1). 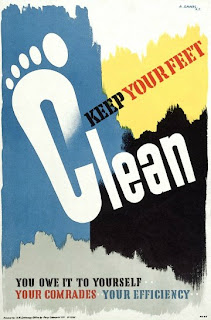 Footcare regimes were also recommended – a man could be extremely uncomfortable, if not immobile if simple foot checks were not adhered to. Varicose veins posed a more painful problem. In extreme cases, Blacker concluded that a soldier was ‘unfit to proceed overseas’, particularly after an operation where rest was required. (Blacker to Hertford, 2nd June 1941, PP/CPB/E/2/1).

Deafness among troops was also inevitable. Men exposed to ear-splitting blasts often resulted in a worrying loss of hearing which could jeopardise the safety of comrades – another reason for Blacker to catagorise them ‘unfit’ (letter dated 13th August 1940, PP/CPB/E/1).

The long-term effects of the Second World War became evident in Blacker’s survey of psychiatric treatment which he began in 1942. Not suprisingly, he discovered an increase in cases of war neuroses and suicides in the subsequent post-war period. Blacker’s much-needed, though Herculean task, was published in 1946 under the title: ‘Neuroses and the Mental Health Services’. His mentor, Aubrey Lewis pointed out: ‘No one could have been better qualified to organise such a survey’ – the problem of neuroses was ‘one of the most important in social medicine which touches every aspect of life’ (letter dated 24th Aug 1946: PP/CPB/D/5/4).

The survey highlighted the need for psychiatry to be ‘closely integrated with general medicine – previously, the subject had been a low priority, if not ignored.  He proved that training of doctors and nursing staff was crucial, and that the ‘chronic shortage of beds for early psychiatric patients’ should be addressed (review of his survey by Humphrey Milford, PP/CPB/D/5/6). In short, Blacker identified that ‘preventive psychiatry was ‘a largely sociological question’ (review by the Newcastle Medical Journal, May 1946, PP/CPB/D/5/6).

As if this project was not enough, simultaneously Blacker performed selfless deeds as a medical officer – when he was evacuated at Dunkirk in 1940, he was awarded the George Medal for his gallantry in rescuing a wounded officer from a minefield in which two men had already been killed (PP/CPB/A/4/6). This was not the only heroic deed it seems: Dr Greta Graff, a fellow medical officer, commended him on a similarly noble act in a note dated 25th February 1944:

‘how splendid I thought your behaviour was last night remaining with the trapped casualties under that debris until the Incident Officer had decided to call a Mobile Aid Post, and I appeared on the scene’

Blacker’s archive will be available to view in full next year when the Wellcome Digital Library is launched.